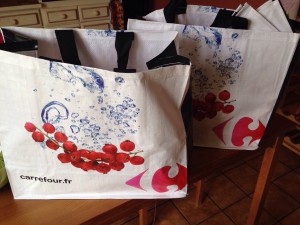 Have you ever gone grocery shopping in a foreign country?  A country where you have no idea of what to do or what to buy?

It has happened to my family before when on a previous trip to a wedding in the Basque Country. My mom and brother attempted to buy ham.  They ordered a few kilos and once they realized just how much that was, they understood the shocked – or maybe even disgusted – look on the butcher’s face regarding their order.

That shopping trip is something we have laughed about several times.  Remembering that particular shopping experience, I tried to make smarter purchases during my first few trips shopping here – but I can only imagine how I looked walking the isles of the large supermarket.

With each attempt at trying to figure out how to get around, here was my thought process;

◊ Put on a tough face and go
◊ Follow my friend Maggie’s advice, “fake it ‘till you make it”
◊ Enter each situation with complete confidence.

Sounds easy right, and it was until the moment I was forced to have any communication, then that confidence all went away. I am specifically talking about when I needed to be speaking in French.

I went grocery shopping my first three days in Ustaritz and each time it was an adventure.  The first few trips I did not dare purchase fresh fruit and vegetables for fear I would have to figure out how to use the weight machines.

To figure out what to do, I decided to concentrate on what others were doing.  In some cultures I would have been accused of flat-out staring, and in other cultures the legal system would have labeled me a stalker, but I figured it was surviving. I am sure I looked as confused as I felt, standing there with my mouth wide-open watching intently as people made their way up and down the isles.

I followed shoppers to see what they were buying, I took inventory of what they had in their carts as it was more than likely going to dictate what I would also be eating that night.  But fantasy faded and reality hit when I realized I had no idea how to cook what they were putting in their baskets.

Chocolate bars, Kinder bars to be more specific, went quickly into the cart, followed by shampoo, face wash and eye make-up remover.  When Mr. Big mentioned long before that we could live on cold water and love, I was afraid we were going to have to make that a reality.

I walked around some more finally adding chicken breasts to my cart and off I went, I was done.

I stood there feeling good, actually feeling great.  I smiled at the nice people around me.  And then another sudden observation, panic hit again, how was I going to get my groceries out of the store. Everyone around me had their own shopping bags and all I had was my beautiful Michael Kors Christmas gift from my mom.  I sure as hell wasn’t going to put raw chicken in there.

I started to sweat as I envisioned myself carrying my purchases through the store and out the door.  What was I to do?

Suddenly in all its glory was a rack of reusable bags. I grabbed three, not really knowing how many I would need and proceeded through the checkout line.

The cart I was using immediately caused a loud and obnoxious beep, which then caused everyone around to start staring.  I stood there, frozen, waiting to see what to do next. Fingers points and the French language filled the air as I tried to figure out what the clerks were saying.  Apparently I had crossed a very important imaginary line that only certain types of carts were allowed to cross, mine was not one of them.

I paid, more French was rattled at me, “Only English” were the only two words I could say, I threw my monopoly looking money toward the woman working the cash register and I walked out.

I sat in the car, calmed down and I felt accomplished. I opened my new reusable bag and pulled out my more precious purchase – God bless the Kinder Bar.

Once home, Mr. Big quickly informed me that for the environment’s sake his country had switched to reusable bags.  I didn’t know how to tell him that my county was trying that too but recent reports had found salmonella in those bags and it was making people sick.  I figured it wasn’t my job to act as the FDA.

For dinner, chicken and the small bit of salad in the refrigerator from before and of course the staple dinner item, bread.  Did I forget to mention that I also bought bread? Apparently it was old bread…who knew!

6 thoughts on “Fake It ‘Till You Make It”