I’ve had a very busy few days so am relieved to find a few minutes to report to you all a snippet behind the scenes at San Sebastian Food from last weekend.

Friday 23rd April – Friday early evening was a private tour for a gastronome from Denmark, now the favoured destination for people wishing to try Noma, the latest number 1 restaurant in the world (http://www.theworlds50best.com/awards/1-50-winners).  There followed my second pintxo tour of the evening at 9.30pm for an English couple as part of a Michelin Star gourmet weekend.  Jovial chats were had with the bar staff especially in Goiz Argi as I re-ordered for the 2nd time in one night their fabulous Brocheta de gambas with refreshing glasses of Txakoli (local white wine grown in nearby Getaria) 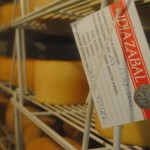 Saturday 24th April – Beautiful weather for a special countryside tour and I never tire of visiting, high in the hills, the hard working couple Imna and Mikel who kindly show my guests around their Idiazabal cheese farm.  I have huge respect and admiration for the intense work which goes into producing their finest quality cheese.

I bought an extra cheese for Turlough, an Irish chef and close friend of mine who lives here and who has worked in many of San Sebastián’s finest Michelin star restaurants including Zuberoa, Arberlaitz and recently Martín Berasategui in Lasarte.  He wants to take some cheese back for his Mum’s 60th birthday party next week. We then went on to the market in Tolosa, it was good but not as fun as other weeks, perhaps people were at the cider fiesta in Errenteria.

Being such great weather, we quickly headed off to Getaria, a fishing village not far from San Sebastián for a whole monkfish, grilled on the bbq and a delicious, simple salad.  I had to order some Kokotxas (the meat from the chin of Hake), cooked in a parsley sauce called Salsa Verde.  They were sublime but I think my guests weren’t so keen as I appeared to eat the lion’s share!

Still busy, busy with bookings, I managed to squeeze in a pintxo tour for a couple of Japanese guests staying at the Maria Cristina Hotel between 6.30pm and 9pm.  There was little English spoken between us but with thumbs up and rubbing of tummies, we all enjoyed some fantastic pintxos.  It was fun going to different bars I hadnt visited for a while and trying new pintxos on their menus.  I was surprised just how much my Japanese guests ate and drank and dont think my accountant (nor my brother who acts as a business guru for me) would be very pleased with the net profit, oh well! 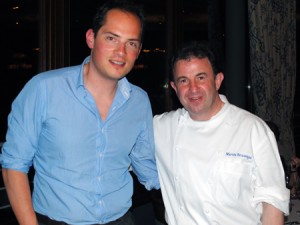 Jon with Martín Berasategui at his 3 Michelin Star restaurant

Then for the big dinner of the year so far, a night at Martin Berasategui in Lasarte, the three-Michelin star restaurant (position 33 in the world). It was a fabulous evening and I owe great thanks (and a steady supply of bellota jamón) to my cousin Mark who so kindly treated us all. Unfortunately my food photography is still of a very amateur level despite Damian from Go Spain giving me a crash course in the back of a taxi last week. So no photos of the food other than this one of me and Martín taken by Nicole after dinner!

Well, Sunday 25th April morning was another beautiful day, blue skies and warm breeze from the South and after picking up transport, it was time to drive over to the Maria Cristina Hotel to meet some American guests from Atlanta for a bespoke tour. We had plenty of time to chat en route which I always enjoy and took the old Igueldo track road back to San Sebastián by 2.30pm.

I then joined friends for Des’s birthday lunch at the new Kursaal restaurant Ni Neu (‘me and myself’ in English or ‘yo mismo’ in Spanish).  The menu, for 39 € including wine, was pretty good and sitting outside with views of the river, mountains as well as the sea was relaxing (the Torrijas dessert, a type of French Toast was fabulous).

Martín, sommelier serving the first wines of the evening in the Rekondo private cellars

By 7.00pm it was time for San Sebastian Food’s inaugural wine tasting and tour at Restaurant Rekondo.  I was very excited because its such a special event and it went without a hitch.  Txomin, the owner and wine lover who has single handedly selected what is certainly the most important wine collection in Spain, is the epitomy of modesty.   With waves of his hands and an appreciative smile, he shyly rebuffs our compliments and tries his hardest to persuade us that his daughter, Edurne and Martín (their sommelier) are the ones to thank.  It was a fantastic experience and I’m already looking forward to returning this Sunday for the next tasting so now I need to find some bookings!

With that in mind, we now have our first bookings under our belts for the Discover The Basque Country Tour, 5th – 8th July – 12 places to go!