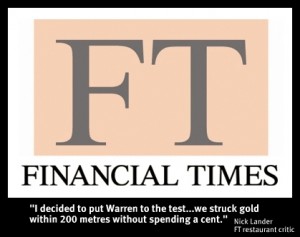 “I headed for the exit in need of tapas and a glass of sherry, only to find my route blocked by a figure with a notebook and pen in hand.  The man was Jon Warren who, after coming to San Sebastián to work as a waiter, discovered he so enjoyed giving wine and food recommendations to the city’s many visitors that he founded San Sebastián Food, using local knowledge to create culinary experiences.”

“I decided to put Warren to the test as the conference was taking place in Gros, a part of the city I know less well. We struck gold within 200 metres without spending a cent. Bodega Donostiarra comprises a wine shop and adjacent bar but it is the unchanged interior of the former that immediately charmed me. Wine was stored everywhere on dark wooden shelves. Two men were behind an old counter chatting and putting the world to rights.”

Jon was able to guide Nick to some of the city’s lesser known bars and restaurants, avoiding the Michelin stars for more intimate experiences.  As well as many bars, Nick was particularly taken by Jon’s recommendation for Gandarias, a wonderful restaurant where Jon knows the staff very well.

“Its a favourite restaurant of mine, and when my parents are over, its the first place we go, commented Jon”.

Nick went on to mention in his article:

“Equally memorable was Warren’s recommendation for the following evening, dinner at Gandarias, located at the corner of two cobbled streets in the old town.”

Asked how he feels about the recent press overage, Founder Jon Warren said:

“I am absolutely delighted.  Nick was a delight to meet and it was a great pleasure to spend time together.  I’m looking forward to seeing him when he is next back in San Sebastián.  I hope he might come back with his wife Jancis Robinson so I can introduce her to our wine expert Jenny Siddall!”

To read the full article, click here to download or print a PDF or see related files below.