As of 1st January 2012, San Sebastian Food has become a Limited Company.  The move from sole-partnership reflects the continued success of the business and its growth plans for 2012.  “San Sebastian Food has experienced considerable growth in 2011 and it now seems to be the right time to expand the structure of the company”, said Jon Warren, the company’s founder and managing director.

San Sebastian Food becomes a Sociedad Limitada (SL), the Spanish equivilent of a Limited Company (LTD).  The move reflects the companies continued growth in 2011 and their plans for expansion in 2012. 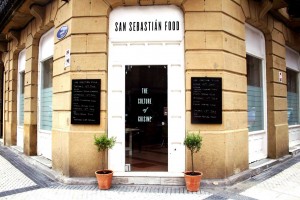 ompany moved to new premises in the heart of San Sebastian’s old town.  A prime site was found behind the famous Bretxa market, very close to the tourism office and nearby to the wide bouleveards of the city centre.

The team of staff at San Sebastian Food has also increased with the introduction of culinary co-ordinator Eli Susperregui.  Eli, who has lived in San Sebastian all her life, brings great experience to the team with her languages and knowledge of all things Basque.

For any media or press enquiries, please contact Jon Warren.