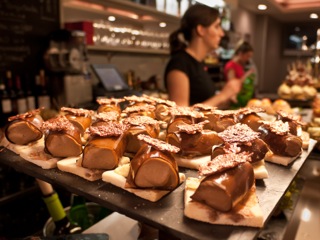 By Olwen Mears. Basque cuisine is no longer Spain’s best-kept secret. But as waves of tourists are drawn from far and wide by San Sebastian’s michelin-starred restaurants (three in total) they are in danger of overlooking some of the city’s best food, though it is right under their noses.

‘Pintxos’, generally found stacked up upon the bars of this city’s many tavernas, are not simply bar snacks. Nor are they always in such handy reach. If you settle for one of an endless array of brochettas or ‘montaditos’ (excellent if you are in a hurry) you could be missing out on some of the more tasty options, freshly made in the kitchen.

Winding up in the old quarter of San Sebastian, however, you could be forgiven for settling for a quiet beer and a mediocre snack in any pub that offers you a seat. Particularly if you are here for a short visit.

Going out for pintxos is more than just an ‘alternative’ to dinner – it is an entire culinary experience. Getting the best pintxos, however, sometimes means having to fight for them, and this can be difficult if you are not already in the know. What is more, unless someone leads you by the hand you could leave the city unaware of just how much variety is available.

To ensure my evening’s pintxo odyssey was as eclectic as possible I made a booking with gastronomic tour company San Sebastián Food. Born out of one Englishman’s desire to share his “3-year gastronomic adventure” with those just passing through, the company offers a range of culinary expeditions of which the pintxo tour is by far the most popular.

Our guide for the evening was Eli: Born and bred in San Sebastian, she has built up an excellent rapport with city’s bar staff, essential for cutting to the front of some potentially long queues.

After a quick stop at Goiz Argi (C/Fermín Calbeton, 4), Eli took our group (one couple from Australia, two from the US and me) to the famous Mejillonera (Puerto, 15) without which no true pintxo tour is complete. With an interior that looks something like a fastfood joint, this is a ‘no frills’ experience minus the no frills food. 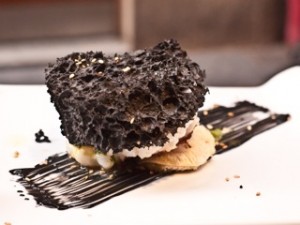 As the name suggests, la Mejillonera (literally, Mussel bar) specialises in snacks from the sea, particularly, as the name would suggest, mussels. Located just a walk away from the port, there is standing room only in this loud and bustling joint where, time gone by, sailors would have dropped in for a drink and a bite before heading on to their next outing.

Huge portions of large, succulent mussels in spicy tomato sauce, brochettes of octopus, battered squid and potatoes with ali-oli sauce can all be washed down here with a refreshing glass of crisp cider, the Basque Country’s most decidedly down-to-earth beverage.

Everything non-edible at the Mejillonera ends up on the floor or, more precisely, a special tin depository lining the bar. It is a shocking image for those not used to the Spanish way but that satisfying clunk as you chuck away your mussel shell forms a mandatory part of the stop.

The next place on the tour could not have been more of a contrast. At Zeruko (Pescadería, 10) pintxo preparation is an art form. After passing a bar covered with tapas that ranged from eggs hard-boiled in meat stock to gold-painted artichokes we were led directly to a table and served a civilised glass of wine.

Dinner here consisted of a do-it-yourself pintxo: cod over a lump of seething charcoal with an accompaniment of caramelized onion, cod stock and fine herbs. Added to this was some of the bars most original innovations: Parsley pearls and a shot of liquid lettuce. To taste it is to believe it.

If the experience at Zeruko seems too much like art before appetite, the next two stops took us to Gandarías (31 de Agosto, 25) for a pintxo of their finest ‘solomillo’ (tenderloin steak), followed by La Cuchara, just opposite, where we ate snacks of grilled foie gras, veal’s cheek and mouthwatering suckling pig.

The tour’s sixth and final stop at La Viña (31 de Agosto, 3) was a welcome change of pace. Just when it seems you can’t eat anymore, a slice of home-made cheesecake, cool and delicate on both the palate and the stomach, served with Ximón Pérez dessert wine is the perfect way to end your evening of culinary discovery.