As a person learning Euskara online and far away from the Basque Country, I realised early on that I would need to take extra measures to help make the learning process easier and more effective. This is where the Language Learning Toolkit comes in. The Language Learning Toolkit consists of anything and everything I can find that will help me: learn vocabulary words, understand grammatical concepts, fine tune pronunciation, sharpen reading and comprehension skills, etc.

The first tool in the Language Learning Toolkit that I want to discuss are: FLASH CARDS.

Since Euskara is a language isolate, it is a given that a majority of the words used will not have any similarity with another language. There are some exceptions though. For example: merkatu is a cognate of the Spanish mercado as well as the English market, making it quite easy to remember. However, most of the words I have encountered so far in Euskara are completely different from its counterpart in English or Spanish. For example: zuhaitz is very different from its Spanish counterpart: árbol and its English counterpart: tree.

This is where flash cards come in handy. Whenever I encounter new words or whenever I am given a new vocabulary list (in the BOGA program, a new list is given every session and in Bakarka, a new list comes in every chapter) I immediately create flashcards for them with the English and Spanish translations at the back. Sometimes, I also end up including a little drawing to give myself a visual aid to further cement the word and its meaning in my brain.

So, here’s a detailed step-by-step guide on how I made my flashcards. I create all of my flashcards uniformly as I’ve found that this particular way of doing it makes it easier to do a quick study whenever I can. 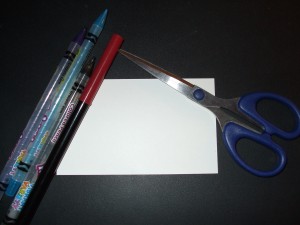 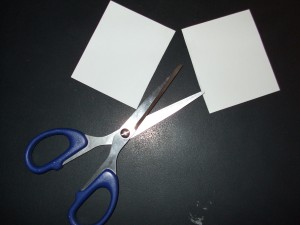 Fold the index card in half and cut. 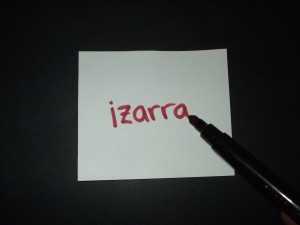 One one side (preferrably the unlined side), using a red felt tip pen, write the word in Euskara. 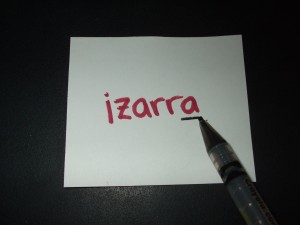 With one of your crayons, underline the a at the end of the word if it is an article and not an organic a. (The a in the word izarra is an article as the root word is actually izar, however, the BOGA program tends to give all words with the article already in place… so in a way, that makes it hard to figure out which one has an a as an article or an organic a) 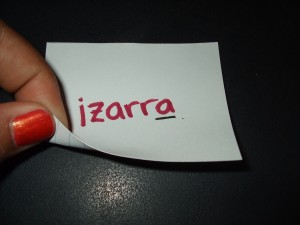 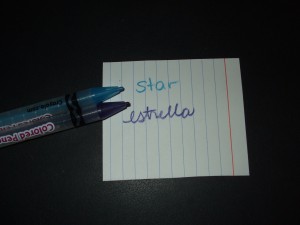 Write the definition/s at the back. I prefer to write the translations in English and Spanish as I sometimes find it easier to come up with the meaning of the word in Spanish rather than in English. Plus, I think it would be beneficial to be able to switch easily from the three languages rather than just the two. 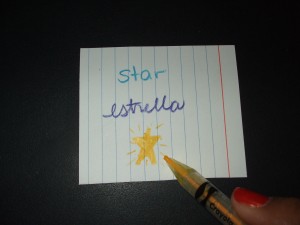 Go ahead and give yourself a visual aid if you want to! 🙂

Although it’s not pictured, I also write a number on the lower right hand corner of the front side of the flash card. The number refers to the session wherein I first encountered the word.

Once you have a stack of flash cards ready, make sure you put them in a small ziplock or a small pouch and carry them with you wherever you go. Whenever you can spare 5-10 minutes, take them out and slowly go through each one and as each day progresses, try to see how many you can remember without having to look at the definition.

Here are some of the places I’ve taken my flash cards to:

That’s it for now, folks! Please feel free to comment with any tips on making flash cards or where to use them!