The two great pelotaris poised to clash in the Manomanista final on Sunday met at 12 noon today to select the balls they will use at Atano III. Aimar Olaizola selected balls weighing 106.4g and 105.3g, while Irujo went for heavier choices at 106.7g and 105.9g.

At a press conference which followed the selection, Olaizola declared his satisfaction with his balls and looked ahead to another meeting with his arch rival. He declared Irujo “hard to beat”, due to the pace of his play and his strength in the air. He highlighted lack of recent match practice as his major problem heading into his meeting with Irujo but seemed satisfied with his training and stated that the speed of the fronton at Atano III would suit him. Aimar is in the unusual position of having reached the final after playing only one match, this due to the injuries of his would be opponents, Barriola and Beloki. He professed that it felt ‘weird’ to reach the final in this way and stated that Irujo is the clear favourite owing to his greater competative experience of late. Aimar, due to the misfortune of cancelled games, has not played a competative match in over a month, and despite not having lost a game since the pairs final, the nature of his form is anybody’s guess. The Goizuetarra admitted his own doubts, declaring his fear at his possible lack of top end pace as a result of his enforced lay-off.

However, Irujo is in no mood to underestimate his opponent, who whatever his form, remains a great champion. He acknowledged the sense behind his favouritism with the bookmakers, having overcome three potential banana skins in Xala, Gonzalez and Bengoetxea VI, with barely a hair out of place. However, the man from Ibero does not place any store by odds, insisting that he will play the game as if his chances are 50-50. He recognised Aimar’s ability to rise to the big occasion, as well as his ruthlessness, given half an opportunity to impose himself. Irujo declared him “hard to beat” and a pelotari at the pinnacle of the game, who will come out and play “100 or 120%” to claim the top prize. 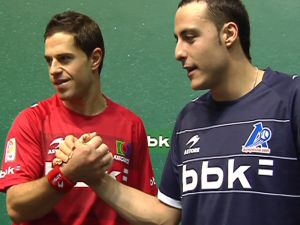