Juan Martinez de Irujo has one foot in the final after a pulsating match against Abel Barriola at Labrit on Saturday. The game had been eagerly anticipated all week by press and fans alike, and the two players did not disappoint, launching into a game oozing with star quality. Barriola, the marginal underdog, dominated the early part of the match, sweeping to a 10-2 lead, and playing like a brick wall through which nothing could pass. Many times in his career, Irujo has found a way back from dire straits, but here the task looked near impossible, with the magisterial defender utterly on top. However, Irujo is a phenomenon, and come back he did, to break the hearts of travelling fans from Leitza. Irujo swamped him in a whirlwind of virtuosity and raced, improbably, to his second win of the semi final stage. All is not lost for Barriola, who defeated Gonzalez last week. He plays Titin, who is out, this weekend, with a final berth there for the taking, though its ultimate destination will depend on how Gonzalez fares against Irujo; the odds are against him, but he has of course done it before, in last year’s final. 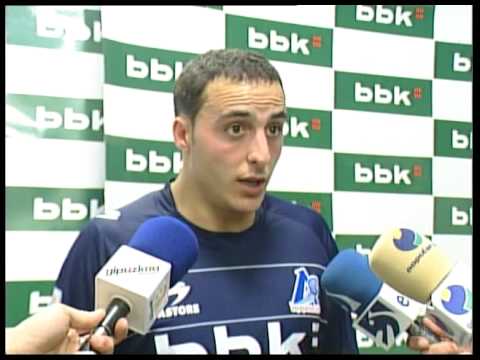 Irujo can never be counted out, even when eight points down