Firstly, apologies; I’ve been in Belgium ever since Christmas with no chance to watch pelota, let alone write about it, and a lot has happened in that time. It’s time to redress the blogging silence!

It took Oinatz Bengoetxea less than half an hour to destroy Juan Martinez de Irujo, and land the 12,000 Euro cheque as Masters champion. The Leitzarra subjected Irujo to a taste of his own medicine, dominating with his serve and volleying with aplomb on his way to a 22-8 victory. Irujo started as the hot favourite, and won the first four points, but from 1-5 down there was little stopping his opponent, who added a further nine points without reply.  Irujo fought back to 8-10 but Bengoetxea surged again, playing at a furious pace, and showing the very human side of the Manomanista champion. Diario Vasco 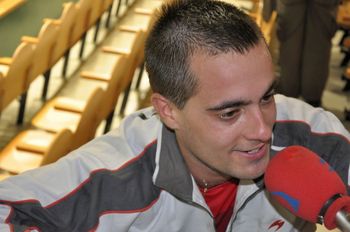 Lift of for the 2011 Pairs Championship

The pelota year begins with the Pairs, an epic contest which runs from early January until April 17th. Each empresa enters four combinations, and each pair plays every other pair twice, the top four advancing to the semi finals, which are also played as a round robin. The 2010 champions are Xala and Aitor Zubieta, but owing to his serious knee injury, the latter will miss the chance to defend his title. Xala plays instead with Abel Barriola, in a combination which oozes class. The most surprising pairing is surely that of Irujo and David Merino, the 20 year old first year pro last seen on the receiving end of a thumping at the hands of Idoate in the second tier Cuatro y Medio final. Merino is an exciting talent, but his promotion to the top flight to partner the number one player must surely raise eyebrows. Is it too much too soon for the man from Rioja? Time will tell. His call up means no repeat performance for Mikel Beroiz, who partnered Irujo last year. Another notable pairing is that of Oinatz Bengoetxea and Patxi Ruiz, who lit up the summer festivals in 2010. Ruiz has experienced resurgence in past months and has his chance with a partner who could accompany him deep into the spring. Aimar Olaizola, who won the 2009 title, is back for more, but his then partner Oier Mendizabal is left out, making way in the elite eight for Alexis Apraiz, who has clearly been groomed for this by Asegarce. The full line-up is as follows:

The championship commenced last weekend with the first rotation of matches, and the results were as follows:

In as far as we can glean anything from the first week of matches, it seems the Irujo – Merino experiment may not be working. The pair was thrashed by the tested combination of Bengoetxea and Ruiz, and by all accounts looked all at sea. They may of course settle, but the omens are not good. Xala and Barriola did all that was expected of them and more, putting Asier Olaizola and Beloki to the sword with clinical efficiency, and confirming their status as likely favourites. The closeness of the other two matches suggests absorbing times ahead. For a full fixture list, see Asegarce’s website. I will post broadcast schedules for this weekend in due course.

Barriola and Xala made a storming start

Aitor Zubieta goes under the knife

As his colleagues got down to business in the championship he won last year, Aitor Zubieta was preparing for surgery to repair his torn anterior cruciate ligament, acquired in his Masters semi final against Bengoetxea. The operation took place yesterday at the Clínica Ubarmin near Pamplona, and was deemed a success by surgeons. The procedure lasted for a hour and a half, and carries a recovery time of around six months.

Zubieta: the long road back