The 2011 Cuatro y Medio Championship begins on Friday 7th October, with the final to be held on 27th November at a location yet to be decided. The competitors for Martinez de Irujo’s crown will be as follows:

For the full calendar, see here

Many apologies for the lack of recent updates; I have been in France and unable to post. I missed the San Mateo final as a result, but I can report that it was won by OLAIZOLA II -BEROIZ, comfortably beating MARTINEZ DE IRUJO – MERINO 22-13 at Adarraga. Quoted by Asegarce, Olaizola stated that they had been focussed from the start, with Beroiz playing a good game and himself taking the sting out of Irujo’s pace. Beroiz, for his part, expressed his delight at winning his first title for his new empresa. Olaizola was named the undisputed player of the tournament, continuing in the final where he had left off in his devastating hammering of Berasaluze VIII in the previous match.

Tonight sees the return to competition of Abel Barriola after five months on the sidelines following a wrist operation in April. The defender has been cautious about the timing of his return, fearing a relapse and wanting to be fully fit for the Cuatro y Medio Championships. Also tonight, there are two semi finals in the San Mateo Cuatro y Medio tournament. Retegi Bi plays Idoate in the first, which will be televised. The second is between Arretxe II, replacing Saralegi who has a hand problem, and Olaetxea. Cecilio and Lemuno have already progressed to the next stage, beating Zabaleta and Untoria respectively.

To watch, go to https://www.eitb.eus/es/deportes/deporte-en-directo/

Aimar Olaizola was in devastating form in the opening match of the San Mateo tournament, putting to the sword Pablo Berasaluze and champion defender Aritz Begino in staggering fashion. He amassed sixteen winners and nobody else managed a solitary one. The game started competitively, with the sides drawn at 3-3, but from there the floodgates opened. Berasaluze has been in fine form in recent weeks, but here he was taken apart as Aimar displayed the full range of his shot making, pulling off nine gantxos, two dejadas, four volleys and a beautiful dos paredes. By the closing stages, Berasaluze appeared to have given up, utterly outclassed and without a hope of stemming the tide. Begino did what he could to keep Olaizola out of the game, but it was to no avail. Beroiz was an excellent support from deep, making only one error and providing Olaizola with immaculate service with which to work his magic. The victors play Titin III and Zubieta on Friday; it remains to be seen whether the former can do anything about the Goizuetarra’s elemental force.

In the San Mateo encounter on Saturday 17th, MARTINEZ DE IRUJO and MERINO I beat BENGOETXEA VI and PATXI RUIZ 22-13. The losers will have to defeat Xala and Laskurain on 2oth to stand any chance of progressing.

Berasaluze was taken apart by Aimar

The San Mateo tournament commences in Logrono tomorrow. The pairings are as follows:

For the full schedule, see Asegarce. EITB has a new platform for viewing their online programmes HERE and I haven’t fully worked it out yet. I think the schedule below is correct, but it appears that tonight you can also watch the match from Bermeo here at 22:30. The listings are not clear about Sunday’s match, so forgive me if this is inaccurate! 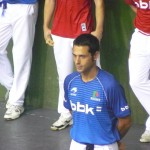 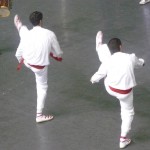 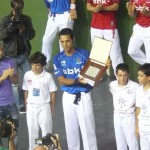 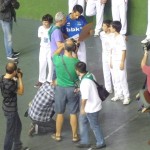 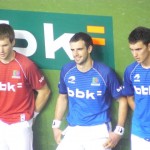 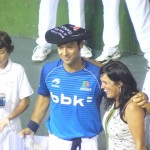 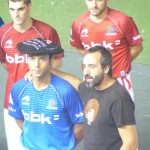 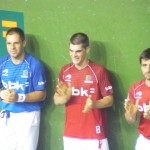 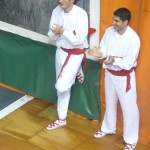 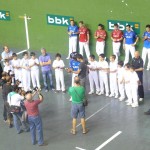 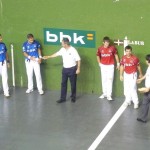 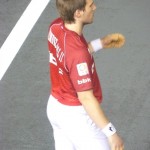 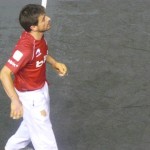 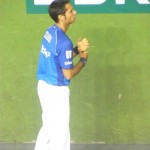 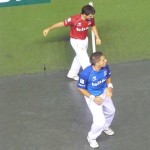 Add two great pelotaris to a swell of guitars, dance beats and swaying villagers, gathered around a fronton from a bygone era, and you get the new music video from Arrebote, designed as a vehicle for their song, ‘La mejor dejada’. Arrebote was formed four years ago in the Navarrese town of Alsasua. Member Iñigo Muñoa, who came to know the rhythms of the rumba catalana as a child hearing gypsies sing on his family’s travels, is a friend of Aitor Zubieta who lives in nearby Etxarri-Arantz. Zubieta agreed to appear and spoke to Juan Martinez de Irujo, who also became involved in the project. The result is a 3 1/2 minute video following a group of friends who attend a pelota match, along with botilleros, bookmakers, a priest and an officer of the Guardia Civil. The technical production in this very home-grown project is the handiwork of another villager, Javier Galeano.

The one abiding memory from the first Lekeitio semi-final is the scintillating play of Pablo Berasaluze. He was utterly superior to the great Juan Martinez de Irujo in all areas, and the game revolved around him, his irrepressible spirit, insatiable drive and stunning shot making. He manoeuvred Irujo around the fronton as if he was a puppet on a string, supported excellently by champion defender Aritz Begino, who was a pillar of strength from the back and rarely lapsed in his delivery.

Berasaluze gave the first point away with an almost-perfect gantxo which just skimmed the board, but the two winners which followed signalled his intent, as a looping ball to the corner forced Irujo low and a txoko into space induced a fist pump in its creator. Begino also got in on the act with a  low skidder which foxed Irujo, and soon 0-1 was 6-1. Irujo and Pascual recovered to 9-6 with a run of three points, two of which were rare errors from their opponents and the other a cross court winner handed to Irujo on a plate by Begino. They again briefly threatened a comeback when they closed to 13-10, but Pascual let their momentum slip when his ball from the rear of the fronton hit Berasaluze in the back. From 14-10, the trailing pair managed to accumulate another three points in the game, and the one which took the score to 19-12 showed that Irujo had not completely lost his shot making abilities, as he whipped a gantxo towards the crowd.

However, it was one way traffic in the latter part of the game as Berasaluze, like a never-relaxing terrier, pounced on everything and turned the screw. Irujo was run ragged, with his opponent winning even points where he was forced to scrap, turning defence into searing attack. There was never any doubt about the result, and the Asegarce pair wasted no time in closing out the match as three winners turned 19-13 into 22-13 in the blink of an eye. Berasaluze and Begino embraced in genuine joy at a job stunningly done. They will find out today who they will meet in tomorrow’s final, as Titin III and Zubieta take on Olaizola II and Apraiz.

Image from Deia, by Javier Bergás

The Lekeitio tournament begins today, the first of two semi finals. The other semi takes place tomorrow and will be between TITIN III – ZUBIETA and OLAIZOLA II – APRAIZ. The final will be shown on Sunday.

To watch, go to https://www.eitb.eus/es/deportes/deporte-en-directo/