It is hard to imagine this championship being any more competative. As we enter week seven of eight in the quarter finals, six pairs lie within one point and all the partnerships have a mathematical chance, however slim, of qualification for the semi finals. It was the defeat of Olaizola II and Mendizabal II which threw the fly in the oinment: had the defending champions won, they would have qualified automatically and Xala and Laskurain (who was replaced by Zubieta this weekend) would have been out of the count. Instead, the table has become unfeasibly crowded. Olaizola II and Mendizabal II, with their four points and favourable points difference, remain top despite their loss and are still heavy favourites to go through, if anyone at all can be afforded that status. Berasaluze and Begino are the biggest movers, having raced up to second after a quiet start with their win over Irujo and Goni. Even Olaizola I and Patxi Ruiz, the former whipping boys, may be able to mount a challenge.

Television schedules for week seven will be posted when the become available. Clear your diaries for next weekend; there could be drama.

Oinatz Bengoetxea and Ruben Beloki have put themselves firmly back in the mix for the semi final places with a hard fought victory over former leaders Fernando Gonzalez and Abel Barriola. They started this championship in disappointing fashion but have proved that they have the power to come good when the heat is on. Their opponents, on the other hand, have gone from outright leaders with the appearence of an impassable wall to the losers of three matches on the bounce. It was not a pretty match, plagued as it was by errors and collisions between players who seemed lacking in the ability to strike winners, but the Asegarce pair had the better of it. Only Beloki is truly deserving of praise; it was he who took control of the match after a universally scrappy start, with a work ethic that put his opponents in the shade. He comprehensively outplayed his rival in defence, the normally rock solid Barriola, who was far below his usual exalted level. Barriola, who like Bengoetxea, hails from Leiza, found a way to steady the ship as the match progressed but as he found his stride, Gonzalez misplaced his. As the Aspe pair lost all focus and strategy, and adopted unhelpfully negative body language in the process, Bengoetxea and Beloki found the stregnth to take advantage. They now find themselves in sixth position in the overall standings but are well within striking distance of a place in the next stage. Gonzalez and Barriola, having once led, now lie third. 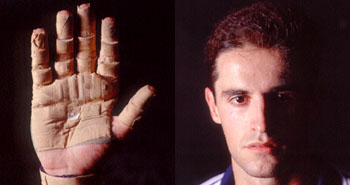