The Torneo Villa de Zarautz is the main attraction this weekend but there is an abundance of other matches taking place across a wide geographical area, from Azkoitia to Burgos. So, what’s happening and where?

Today’s attractive alternative to the action in Zarautz is to be found 30km to the south in AZKOITIA where Manomanista Champion Juan Martinez de Irujo plies his trade alongside new boy Cecilio. They will play the old hand Titin III and Pedro Martinez de Eulate. The curtain raiser to the main event sees another all ASPE affair in which Capellan and Galarza VI play Aritz Lasa and Laskurain.

Azkoitia which has around 11,000 inhabitants, is located in the Urola river valley and is surrounded by rugged mountains. The municipality is famous for being the birthplace of St Ignatius Loyola, the founder of the Jesuits, although he actually entered the world in Azkoitia’s smaller neighbour, Azpeitia, several kilometres to the east.

Next we move outside the Basque Country to the neighbouring province of BURGOS, and it’s capital, also called Burgos. Here, Agirre and Eskudero play Diaz and Iza. Burgos has around 178,000 inhabitants and is famous for its 13th century gothic cathedral, which has been declared a world heritage site. The city was founded in 884 as an outpost on the spreading Christian frontier in northern Spain. It became the capital of the Kingdom of Castille in the 11th century and latterly was the base of Franco’s rebel Nationalist government in the Spanish Civil War.

On the outer reaches of Navarre lies AIBAR, where Asier Olaizola and Oier Zearra play their Asegarce mates Berasaluze VIII (on white hot form of late) and Penagarikano. Also on the bill is a match between Chafee and Urrizelki and Mendizabal and Ibai Zabala. Aibar lies 44.2 km from Pamplona in a south westerly direction and has a mere 920 inhabitants according to the latest figures. The town, the site of many an archaeological find from the Bronze Age, is blessed with an abundance of churches and seems to have been the birthplace of many notable monks….

In MENAKA, the ever smiling Berasaluze IX and Arruti play Retegi Bi and Urberuaga. The later will wish to forget his bad night yesterday at the hands of the very same Berasaluze. Menaka is in Bizkaia and lies about 22 km from Bilbao. It has a population of about 700 and numbers amongst its famous sons the writer Luis Baraiazarra and the 19th century organist and composer Juan José Garmendia.

Tomorrow, PORTUGALETE is the scene of an encounter between Agirre and Bebide, and Diaz and Iza. Portugalete is a town of about 51,000 inhabitants and is part of the metropolitan area of Bilbao. An important port, which in the 14th century was the main competitor of Bilbao in this regard, the town is most famous for the Vizcaya Bridge, a transporter bridge which spans the River Nervion towards Getxo. The bridge was declared a World Heritage Site in 2006.

Once again we leave the Basque Country, this time for a trip to the wine paradise of La Rioja, where the village of BANARES hosts a match between Chafee and Urrizelki, and Mendizabal and Eskudero. The main tourist attarctions in Banares, which is home to just 337 people, are churches. Particularly notable is the typically Spanish gothic church of Santa Cruz, completed in 1510. Potato with chorizo is the local delicacy.

We complete our whirlwind tour with a trip to ARETXABALETA which hosts two matches. The first sees Belloso and Ibai Zabala play Olaetxea and Oleiza but the main course is a game between Berasaluze VIII and Penagarikano, and Saralegi and Mendizabal II. Aretxabaleta is to be found in Gipuzkoa, not far from Mondragon-Arrasate on the road between Vitoria-Gasteiz and Bergara. 6600 people call the town their home and university was founded there in 1630.

For the results of these matches, visit http://www.pelotalive.com

With thanks to Wikipedia, for making life so much easier

The next in the summer’s round of tournaments starts today in the coastal town of Zarautz in Gipuzkoa,which is incidentally the home of the longest beach in the Basque Country. Over the next three days, four couples will compete for the doubles crown which was won last year by Titin III and Laskurain. Today’s matches are not on ETB-Sat but there will be a webcast of the second semi final tomorrow (Sunday). The final is on Tuesday and I will post any broadcast information, should there be any, when it becomes available.

The ties are as follows: 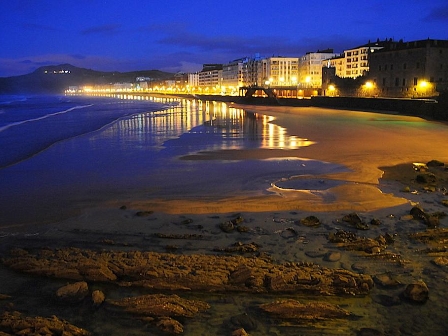 No beach time for the pelotaris in Zarautz