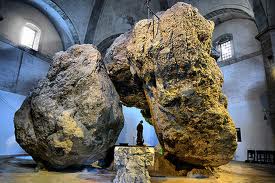 Located in Markina-Xemein, the town considered the University of Jai-Alai (Basque ball game), this is a very odd church. It´s part of my childhood memories, when it was a place just known to locals and you had to ask for the key to the lady living in the caserío (Basque farm) next door. The present church is relatively new, XVIII century, and has no particular artistic value. The interest comes from within the church, a natural megalitic construction formed by three huge stones that are the remains of a mountain of the tertiary period. People in the area thought that the Basajauns (Lords of the Forest, according to Basque mithology) had brought these huge stones to this place, and considered it a magical place, where they performed pagan ceremonies. Later, when the Basque country was christianized, they built a church (not the present one) and dedicated it to San Miguel, and placed a statue beneath the arch formed by the three stones. It´s now the main altar. In summer, and thanks to the great sonority of the place, they held music festivals inside the church.