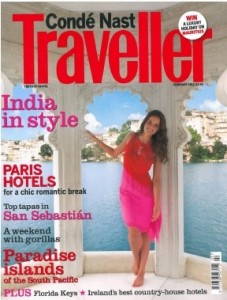 Conde Nast’s February 2012 edition features a 5-page article entitled ‘A Life in Miniature’.   As author Paul Richardson mentions in his article, he met Jon by chance and came into our studio in the heart of the old town while he was visiting the city researching the article:

“And then in one of those moments of serendipity that are the reason one is still in love with travel, I bumped into Jon Warren.  Jon runs a small business called San Sebastian Food, offering visitors a privieged view of a city whose gastronomic excellences can sometimes be a little hard to get a handle on.”

The article goes on to explain more about what the company San Sebastian Food offers visitors, enphasizing the access to specialist knowledge and recommending our services:

“Jon’s tailormade tours of the finest pintxos bars not only cut out the possible disappointment factor inherent in going it alone, they also cut to the chase with the little-known, atmospheric down-home places, the upscale avant-garde places, and the speciality pintxos that only locals know about.”

Paul further talks about Jon and mentions some of the tips he was able to learn which improved his experience.

“From Jon I learned several things I didnt know before.”  Most importantly, that the really classy pintxos are often not to be found on the bar top, which acts as a kind of shop window showing punters what the kitchen can do, but on the menu chalked up behind the bar….”

“Armed with this sage advice, I set out with renewed enthusiasm,” says Paul following his meeting with Jon.

The article finishes by recommending San Sebastian Food in the information panel with full details of our pintxo tour, studio address and website details.

When Jon first arrived in San Sebastian, he read a book by Paul Richardson called ‘A Late Dinner’. It was an true inspiration to him when he arrived in Spain.  It is therefore particularly special and important to him that four years later, Paul has now written about him and San Sebastian Food!

“I thought I knew all about San Sebastian pintxos – but Jon and his team gave me a whole new insight into the best new bars, the right things to order in the right places, and a host of insider pintxo tips. I owe him one!” Paul Richardson.

Paul Richardson is a British food and travel writer and journalist, very closely associated with Spain and its culture. Richardson spent his childhood in the English county of Hampshire, which was the start of a strong relationship with the rural world that he has maintained until today. He studied at Cambridge University and worked as a journalist in a range of communications media in London, such as the magazines, Taste and Wine Magazine, and the The Evening Standardnewspaper.

In 1991 he decided to leave Great Britain and to live in Spain. He spent the whole of the 1990s in the inland part of the island of Ibiza (Balearic Islands), enjoying the countryside and rural life. In 2000 he acquired a small estate-farm in the province of Cáceres (in the region of Extremadura, in the centre-west of Spain, bordering with Portugal) where he continues to live in a rural environment. He is the author of various books, like A Late Dinner. Discovering the Food of Spain, and publishes articles about food and travel in Spain in publications such as The Guardian and Spain Gourmetour.