I had forgotten how it felt to walk in the rain, up and down the street, freezing your butt off, and getting all wet. Other than that, the weekend in San Francisco was awesome. 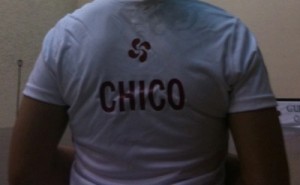 I was one of two players out of Boise to take part in the Ladies Baleen and Paleta Goma Invitational, organized by the several people from the Basque Cultural Center in San Francisco. There were two of us player girls from Boise; I flew down on Thursday night, and Esther arrived on Friday evening. Esther is quite the veteran, and a darned (I edited, see?) good pala/baleen player. I’m far, far, far from being good at it, but you have to start somewhere, right?

The tournament was extremely well organized: from the communication emails, the schedule, to the accommodations and the T-shirts. And then, of course, the participants, a bunch of outgoing girls who were serious about the game. The facilities, wow… I’d already heard about the BCC, the fronton, and the restaurant, but I didn’t realize what a great building this was! Amazing. There showers, and then there are saunas in the showers. Like I said, I’m very impressed.

The main organizers Evelyn, Maitexa, and Xabier (sorry if I am missing someone super important), are very cool people in my book. Maitexa was not only involved in making the tournament happen, but she also put Esther and I up for the weekend, turning both of her rooms to us (towels and gifts included, like in a freaking 5-star hotel!), un-dusting her coffee maker so we could start the day alright, and making the snacks for us to take to the games, just like our amatxu would do. So cute, seriously… And she picked me up from the airport on Thursday, even though I got in at 11 pm. I already thought she was great from the emails she’d sent during the previous days, but when I opened the door of her Honda Civic and saw her, I instantly knew we were going to get along JUST fine. (She did lose some points when she deleted her FB account, but I guess nobody is totally perfect. Besides, I gained like 7 friends on this trip; I don’t need her stinking FB friendship anyway.)

Evelyn and Xabier took me out to lunch on Friday, and they both made sure I was taken care of all weekend long. On Friday morning, Xabier spent the morning coaching us girls, running us through several drills, until the first game of the day was about to start. What a great morning! By the end of the day, even I was hitting “aires”.

Maitexa and I didn’t win either of our games, but that’s ok. I won so much more: new friends, new experiences, more confidence in myself, and a sense of achievement because by participating I helped promote Basque sports for women. It was the first time I’ve done something like this, and now I know it won’t be the last. I leave San Francisco totally impressed with the organization, the hard work, and friendliness of the BCC members.