Boise State University’s Electrical and Computer Engineering, Computer Science, Geoscience and Materials Science and Engineering are proud to announce that it has partnered with the BSU Basque Studies Program and the Boise Basque Museum & Cultural…

If so, this is your chance! Maizpide, a Basque immersion school in Lazkao, Basque Country, has organized a two-week long Summer Basque Intensive Course, from June 31st to July 11th. Check…

Every year since the early 1970′s N.A.B.O., in conjunction with one of the Basque clubs, has organized Udaleku, a two-week Basque Culture Summer Camp. Participants have an opportunity to learn more about…

Why? That’s the first question that comes to mind after WTF when I see a lowered pickup crawling down the road. I kind of wonder the same thing when I…

As I mentioned a couple of days ago, Kapito Harri, a team of Basque pelota players from Iparralde, will arrive in Boise at the end of this week to play an exhibition game of Joko Garbi on Saturday, February 22nd. The team spent some time in San Francisco during the 32nd Anniversary of the Basque Center there, where they also played several exhibition games. The pelotaris from Iparralde were not the only ones making the trip to California. A delegation of pelotaris sent by the Basque Pelota Federation were also lucky enough to participate in the festivities.

Basque newspaper Deia published a very nice article last week (in Spanish), that I wanted to share with all of you. As always, please pardon anything that got lost in translation.

Anniversary of the Basque Center 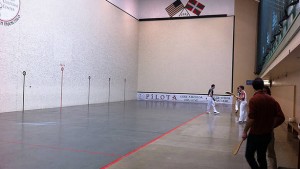 The fronton in San Francisco hosts baseball games throughout the year. Here, players from Ustaritz. Photo by Deia.

BILBAO – Their skin still warm from the sheets, four pelotaris left yesterday from Loiu’s airport  at 7.00 am. The final destination, after a layover in Frankfurt, was San Francisco California. They were part of the delegation that the Basque Pelota Federation sends to the Californian city to participate in the acts of the Euskal Etxea’s 32nd anniversary and the 50th anniversary of the San Francisco Klika. “This initiative has been several years in the making,” says Patxi Jauregi, President of the Federation. “The delegation goes to represent the Basque Pelota Federation and the Basque Country in general.”

Four Basque pelota players will show off their skills in an unusual court for them. “There are other pelotaris who travel from the French side of the Basque Country”, Jauregi added. “We are trying to make the game of pelota a bit more global. The new Board of the Federation wants to highlight this aspect. Pelota, besides being one of our sports, it’s part of our culture. We want to use as a way to convey our roots and our way of being. “

As in recent years, San Francisco is not willing to pass up the opportunity to enjoy a few good games of pelota: “It is the 32nd anniversary of the Basque Center and several events are organized throughout the weekend. Many people gathered during this holiday weekend: people who have lived there for many years and even many who travel from the Basque Country to be there those days. “ 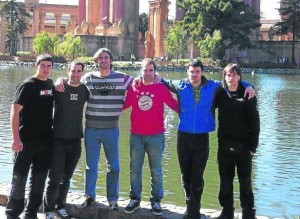 The pelotaris who left from Loiu will play several games against each other, changing partners. “It can be four or five games in two days, then there will be other categories, such as pala, where even players from San Francisco will also participate. There will also be pelota games with players from Iparralde who travel there for the occasion.”

The San Francisco fronton is inside the Basque Center and the rest of the year hosts pelota games regularly. It is the perfect place for Basque delegates from Euskadi to strengthen the ties with new agents. “I use the seven day trip to make contact with people from both the pelota  and the business world. I want to see how to better promote pelota in general and that pelota be our hallmark and serve to bring our roots and our way of being as Basques. We want to do well in this aspect, we want to bet heavily on it. We are also tucked into the international circuit of Jai Alai, where we think we can arrange something very powerful. Ultimately, what we want, it to work for the good of our country. It is the concept we are pampering to pursue our goal: to be known around the world,” explains Patxi Jauregi.

As expected, the pelotaris travel to the U.S. with their illusion as passport, as the opportunity to play in another continent is very attractive. “They are very excited, nobody wants to be replaced. On this aspect, the pelotaris have been very good. They arrived filled with hope and wanting to spend a good week in San Francisco. Besides being active and playing pelota, they want to know everything. The people there are also very eager for us to get there. As I mentioned before, they welcome us with open arms.”

February 22nd will be a fun day in the Basque Block. Not only will the monthly dinner and Bingo take place on Saturday evening, but there are two additional events…

May we all find our Patrick Swayze some day

I saw this bit last week on the February edition of the Euzkaldunak newsletter and thought, wow… What a nice opportunity for a young person to spend a few months…

The City of Boise is applying for designation as a Bicycle Friendly Business from the League of American Bicyclists, and they need your help to make it happen. As part…