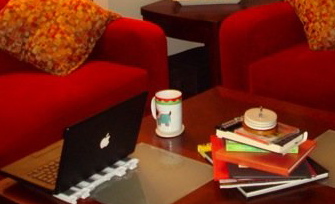 Yesterday I read that Steve Jobs is leaving Apple indefinitely due to health concerns. The news is obviously not a shock, as he already had to take a leave of absence in 2004 for the same reason, when he was diagnosed with a cancerous tumor in his pancreas. This is the third time Apple’s CEO leaves the company (the first time being in 1984, when he resigned after a disagreement with the board of directors), and I’m afraid he will not come come back to lead it again.

I was blissfully unaware of anything Mac until early 2000, when I got hired by Manpower as an Admin for the Macintosh group at Hewlett-Packard. Actually, I was pretty much computer-impaired until 1997. I mean, I sent my first email at the age of 21. Seriously. I don’t know how I survived for SO LONG on pen and paper. But I digress. I am here to tell you that love at first sight can happen. I love everything Mac, and I’ve been in a happy relationship with my MacBooks, iPods, iPhones, and Apple TV since I met them. I always get a blank look on my face when I hear of computers crashing (what’s that?), and I almost threw my Zunes out the window (before they got stolen, that is) when I tried to set them up using the Zune software, which has nothing on iTunes.

I am sad that Steve Jobs had to go. First, I am sad because he is sick, and I don’t wish that on anybody. Secondly, from a bit more selfish perspective, I am sad because an era has come to an end. Change always makes me uncomfortable, even though time and time it proves itself to bring more good than bad, but still. I am sure Apple will do just fine without Steve. Nobody will ever take his place, that’s for sure, because he is unique. So yes, things will be different in the long run, but that does not necessarily mean that they will be worse. There is much more to Apple than just one person, as charismatic as this person may be.

So, thank you so much Steve for making my life, and that of many, many others, easier and way more fun. I hope you beat your disease into the ground and come back stronger than ever. All my best from Boise, ID.