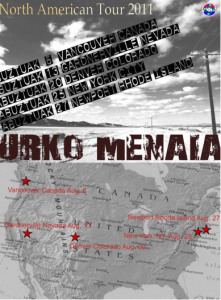 Urko Menaia, a new generation of Basque singer/songwriter, is on tour through the USA until August 27. Born in San Sebastian, Urko Menaia is a composer classical music with poetic and oneiric texts, which bring with them a hint of philosophy. His first album was a collection of traditional songs, while his second includes his own compositions. According to the singer, the songs are generally mellow and influenced by Jose Afonso on the one hand, as well as Sinead O’connor and Bob Dylan. The tour is made possible by a special fund created by the Basque Government to help new Basque artists become known overseas.

Urko Menaia has participated in various projects such as ‘Fanniplatz tangoa’, a group in which he fused Basque popular music with Argentine tango. Among his works we find “Ametsak eta Oroitzapenak (Gaztelupeko Hotsak)” in which he brings together nine poetic songs, accompanied by Idoia Oteiza’s piano and Luis Fernandez’s cello. Urko says that his dad, Mikel, plays the classical guitar in one of the songs.

The Basque Government has created a special fund to send over Basque performers for a broad tour of our Basque communities. The objectives are to help animate our Basque community with something out-of-the-ordinary, to reveal some of the new Basque artists and their works and to get our area clubs/organizations working together on some joint events. Each host community is responsible for arranging a performance and negotiating lodging and food for the performers while they are there.  Then after a few days, they move on to the next Basque community.

For this tour, the singer plans on using songs from his last album, as well as folk pieces, and he will most probably improvise depending on the moment.

Urko has been looking forward to the tour for some time now, on the one hand to see the States, and on the other to meet the Basque communities, talk to their members, and live.