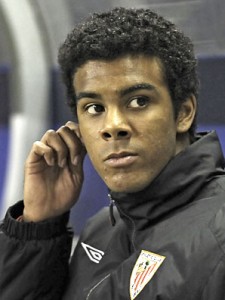 I found this article on Sports Illustrated after seeing About Basque Country Blog’s post on Facebook. The article talks about my soccer team, Athletic de Bilbao, finally “dispelling a longstanding myth” by signing the first black soccer player into the team. Basically, the article implies that, until now, Athletic has been a racist club because of their philosophy to use only Basque players. It looks to me like people are getting color and nationality confused. It’s not that players have to be white to play, they just have to be Basque.

Until recently, Basque population was almost entirely white, therefore, so were Athletic players. In the last few years, however, immigration has had a great impact on Basque society. In this particular case, the player’s dad is from Angola, but 18 year-old Jonas Ramalho was born in Barakaldo, Bizkaia, a town about 20 miles from Bilbao, which automatically makes him Basque, just like it would anybody else. What does the color of his skin have to do with anything?

I don’t understand why people have a problem with Athletic’s philosophy. What’s so wrong about playing with men and women from a team’s own country? Why is that racist? No, it’s better to have a team made up of foreigners and call it Real Madrid. Or take Utah’s basketball team, a franchise that began in 1974 as the New Orleans Jazz, in Louisiana. The team then moved to Utah in 1979 and became the Utah Jazz. Somebody, please, explain that to me. Can you imagine taking Athletic de Bilbao, changing its name to Granada Football Club, and moving it to the south of Spain?

In my opinion, people should think more about following Athletic’s example and less about bashing it.

24 thoughts on “Once again, Athletic gets a jab at his ‘Basque-only players’ philosophy”