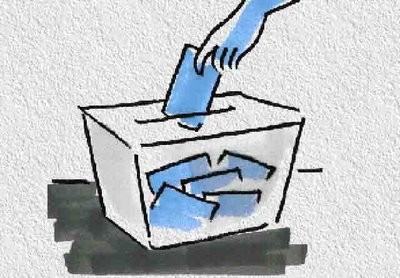 It pains me to say this, but I have a newfound appreciation for politicians (just to be clear though, if all of them were like Boise’s Mayor Dave Bieter, it wouldn’t pain me at all. You’re welcome. Email me!). Yes, I’m a fairly good bullshitter, but that’s not it.

Last Saturday, Euzkaldunak, Inc. (Boise’s non-profit organization to promote Basque culture) held their Members Dinner and General Elections. I ran for the third year in a row, and for the third year in a row I didn’t get in. My ego is still a bit bruised, but time heals everything. My investment in the whole campaign – other than showing up to as many dinners as possible – is volunteering as much as I can, whether it’s helping Izaskun with the naboeuskaraz.com website, selling pop and beer during San Inazio, or working with other Basque Centers to bring bands from the Basque Country to Boise.

I can’t even imagine how it would feel to lose an election after months of fundraising, traveling, debating, hand-shaking and baby-holding.

After hearing the results, I picked up my kids from the daycare downstairs and left the Center as swiftly as I could. I felt my lip starting to quiver, and that would have been embarrassing. I know the election was close, but it hurts a little that I ended up as the alternate again. As I was driving home on Saturday, my first impulse was to call it good and not run again, but two days later I already know I won’t be able to hold that thought. Not running again will definitely keep me off the board, and that’s the opposite of what I want. Besides, whether I do it now or five years from now, there will always be Basque events to plan and Jaialdis to organize.

In the meantime, I’ll continue enjoying Jesus Alcelay’s dinners and lending a hand whenever possible.

See you next year!

14 thoughts on “What would Scooby do?”