Aberri Eguna (“Fatherland Day”) is a holiday coinciding with Easter Sunday which has its roots in the Basque nationalist movement. It was first organised by the Basque Nationalist Party on 27 April 1932 in Bilbao, then consisting of a demonstration of some 65,000 participants which terminted at the Sabino Arana House. It has since become the unofficial Basque national holiday. 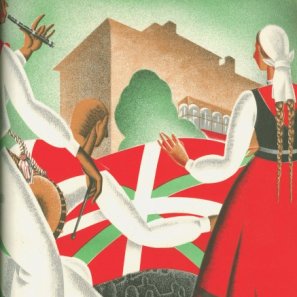 Aberri is a neologism coined by Sabino Arana based on the suffix -ba which occurs in numerous kinship terms (e.g. osaba “uncle”, izeba “aunt”, arreba “sister of a man” etc.) from which he fancifully deduced a putative root *aba “father”. He formed numerous neologisms based on this putative word such as aberri (*aba + herri “land, people, country, settlement”), abizen “surname” (*aba + izen “name”) or abenda “race” (*aba + enda “lineage”).From aberri he then went on the coin abertzale “patriot” (aberri “fatherland” + -(t)zale, a suffix denoting someone keen on something). In spite of their fanciful derivation, aberri and abertzale have found their way into general usage.

The first Aberri Eguna was held in memory of Sabino Arana having “invented” the concept of political Basque nationalism in 1882 according to his own writings. There are some claims that the date was artificially assigned after Arana’s death. It coinciding with Easter, however, is deliberate as it follows the motto of the Basque Nationalist Party Jaungoiko eta Lege Zaharrak “God and the Old Laws and the symbolism of the resurrection of Christ”. Ideologically, it follows the examples of the older Catalan and Galician patriotic holidays, the National Day of Catalonia (from 1889 onwards) and the National Day of Galicia (from 1919 onwards). It was then celebrated in San Sebastián in 1933, in Vitoria-Gasteiz in 1934 and in Pamplona in 1935. From 1936 onwards, the year of the outbreak of the Spanish Civil War it was no longer celebrated in a single location but instead in various localities on a smaller scale and under clandestine conditions as under Franco, Aberri Eguna was forbidden from 1937 to 1975. It was only freely celebrated in the Northern Basque Country under the auspices of the Basque Government in Exile.

Here you have some examples of how Basque communities in North America will celebrate Aberri Eguna.

Saturday, April 14 – Aberri Eguna Picnic. They are excited to have their first annual sokatira challenge during the festivities.
For more information contact the club here or visit their website.

Sunday, April 15 – Aberri Eguna Picnic. The picnis is just for members and will be taking place at Spring Mt Ranch (where the annual picnic is held).
For more information contact the club here or visit their Facebook page.

Join us on Sunday, April 15th, at the Knights of Columbus from noon until 9PM for a potluck to celebrate Aberri Eguna. Share with everyone your favorite dish, and enjoy the afternoon/evening in a relaxed family-like atmosphere. Children and youngsters, come ready for some fun games! Youngsters and grown-ups, come ready for the 1st Mus Tournament of New England!

Please RSVP to nebasque@aol.com, indicating what you would like to bring. The Knights of Columbus is located at 7 Valley Road, Middletown, RI (see map below). Admittance is $15 for adults (21 years of age and above), intended to cover rental costs, and free for the rest. Attention!: All beverages are to be purchased from the Knights of Columbus cash bar. Cash bar prices are as follows: Soda $1.50, Domestic Beer $3.50, Non-Domestic Beer: $ 4.50, Wine: $4, $5 or $6.

Saturday, April 7 – Aberri Eguna at Mayview Circle, Burnaby, BC
For more information contact the club here or visit their website.