Did you know the Basque Country will have its own local currency, the “Eusko”, at the end of this month? I had no idea until Benoit Etcheverry, the man in charge of the 8 Probintziak radio station, shared the news with me this morning.

The new currency, a project which was in the making since early last year, was presented yesterday in Bayonne by the Euskal Moneta association. The “Eusko” banknotes will be available first in Lapurdi, Lower Navarre and Zuberoa, before extending its use to the rest of the Basque Country. 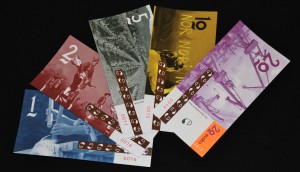 The system works as follows. “Eusko” banknotes are issued and can be purchased at a fixed rate in euros. EM banknotes can then be used in all Basque shops and businesses that accept them. Shoppers and businesses can then re-use them locally. But if they want to exchange EM into euros, they lose 2% of the total value.

According to the organizers, there are several benefits for businesses. First, the “Eusko” can only be used in shops and businesses that adhere to the project, so this means “gaining new costumers” among all those people that take part in it. Second,  the currency will act as a seal of quality, since only shops and businesses that are eco-friendly, locally based, and implementing good social policies will be accepted into the system. Third, as money is lost if EM are changed into euros, local recirculation of the Basque currency is encouraged, and this has positive effects for local economy.

So far, 73 companies, dealers, contractors and association from various sectors (mainly services, commerce and agriculture) have joined the project, which means there will by about 22,000 “Euskos” in circulation by January 31, which translates to the same amount in Euros.

126,000 banknotes of 1, 2, 5, 10, and 20 “Euskos” have been been printed featuring illustrations of cultural nature or landscapes. Citizens interested in being part of the system must join the association (300 have already done it) by paying a fee ranging from 5 to 20 Euros. Then, they will choose which industry will get the 3% of the payments they make in “Euskos”.

Consumers will buy products at the same price they would in Euros, but the provider or dealer will provide 5% when exchanging “Euskos” for “Euros”. Social, cultural, linguistic, and ecological associations participating in the system will keep 3%. The remaining 2% will be used to finance the local currency system. This way, reuse of “Euskos” is promoted instead of exchanging them.

2 thoughts on “The “Eusko”, a new local currency for the Basque Country”