I ran into Mayor Bieter and his wife at the Salt Lake City airport on my way back from Nashville last Sunday. They were returning from Virginia, where they had attended the change-of-command ceremony for the USS Boise. I had no idea we had a submarine named after our city, but I found the whole thing really cool. Especially after he showed me pictures of the crew holding a sign featuring the Boise State Broncos. Even the cooks were wearing uniforms with the BSU logo embroidered on them!

Many residents of our land-locked desert community may not know that we have a namesake nuclear submarine — and that the USS Boise is one of the most decorated vessels in the Navy fleet.

Last week I had the honor of attending the change-of-command ceremony for the USS Boise, currently in port at Naval Station Norfolk in Virgina. Cmdr. Scott S. Luers relieved Cmdr. Brian L. Sittlow, commanding officer since 2010 (waving in the photo above, as the sub returned to homeport last November). 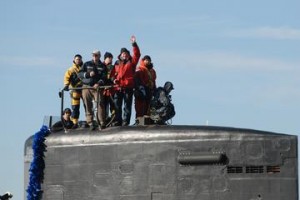 An attack sub is, by its very nature, an extraordinary piece of machinery, and during Sittlow’s command the USS Boise was especially impressive, becoming the most decorated submarine in the Navy. It won the 2010 U.S. Fleet Forces Battenberg Cup as the best all-around ship in the Atlantic Fleet, among many awards for excellence. Sittlow himself was awarded the 2012 Vice Admiral James B. Stockdale Inspirational Leadership Award.

The other remarkable thing about the USS Boise is the degree to which it has embraced our city. The banner that it puts up when it’s in port reads “Go Broncos.” The engine room is painted blue and orange, and the walls are covered with posters and photos of our city and our football team. Even the food servers in the dining room have the Boise State logo on the front of their uniforms.

Most members of the crew have never visited our city, but they are among the most loyal Boiseans I’ve ever met. The only reason I regret our city’s lack of an ocean port is that we can’t welcome the USS Boise to its spiritual home.

My thanks go to Tom Killingsworth and the USS Boise Commissioning Committee, the group of local citizens who support the USS Boise and her crew, for giving me this opportunity to see our city’s namesake vessel prepare for its next voyage.

To connect with the Mayor: