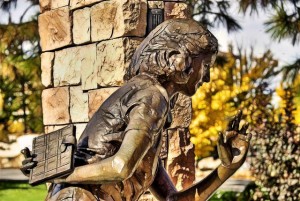 A few weeks back we heard on the radio a story about a Michigan mom having a fit about her daughter’s school forcing her to read pornography. After an excruciating wait for commercials and the weather, Paul J. and Chris Walton finally got back to the story. I’d like to say it was shocking, but things like that do not surprise me anymore. As it turns out, the pornographic book was no other than The Diary of Anne Frank, where there is a section on the changes in her breasts as she is going through puberty. Maybe I’m mistaken, but I thought even puritan women got boobs and pubic hair at some point in their lives.

In any case, where I’m really going with this is the impact the story has had on my kids. After the news was over, they wanted to know who Anne Frank was, and after I told them, they started bombarding me with more questions about the nazis, the Jews, how big the basement was, who won the war, and were those the good guys. I should have known most of the answers already, but high school keeps getting further and further away, so I turned to Google for the umpteenth time. I’d forgotten what a painful time that was. I’d forgotten the atrocities and how young Anne was when she died.

I thought about taking the kids to the Idaho Anne Frank Humans Right Memorial downtown after seeing how interested they were in learning about Anne’s life. However, I was afraid of the things I’d have to explain, the horror and sadness of her story, so I didn’t.

Yesterday, I went with my daughter to her last field trip of the year. We hit Boise Zoo first, then walked over to the Library to see a puppet show and check out some books. You have to pass by the Idaho Anne Frank Humans Right Memorial in order to reach the Library, so I had no choice but to point it out to my daughter. Her eyes widened. I felt bad for keeping the place a secret and promised Maitane we would come back after the puppet show.

We walked around the memorial for about a half an hour. We listened to the recordings scattered throughout, the type you have to wind up in order to hear. We looked at the 180-foot Quote Wall, featuring words of presidents, slaves, children, philosophers. I read a few quotes here and there (there was even one written in Basque), but she only wanted to hear the bits that Anne Frank wrote in her diary. So I read the passages to her, explaining the meaning of the words I knew she wouldn’t understand. Then, a couple seconds of silence while she processed the information and formed her questions, which I answered the best I could: “What did Anne’s parents do while she wrote, just sat around?” “Did she brush her teeth in the mornings?” “Are there Jews in Ortuella?”

By the end of the tour, I felt empowered. We left with two simple, but powerful messages: ‘Do right by others’, and ‘Change starts with you’. So easy and yet, we manage to screw them up every single day.

Maitane and I looked around one last time before making our way back to the car. We climbed in, and right away she asked for my iPhone to go on YouTube. I guess that’s the beauty of being seven. You can go from a meaningful visit to a Human Rights Memorial straight to this and not feel guilty at all. Waddle-waddle.