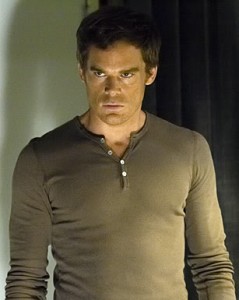 I finally bit the bullet and started watching Dexter on the plane during my trip to Vegas a couple of weeks ago. My husband had bought the first two seasons on iTunes and he and his sister kept raving about it, telling me it was the best show EVER. To tell you the truth, the idea of watching a show about a “good-hearted” serial killer -he only kills murderers- did not really appeal that much to me. It’s kind of an oxymoron, really.

*WARNING* Spoilers ahead (small ones, but spoilers nonetheless)

Well, let me tell you people… When I like a show I usually get hooked on the first episode (Grey’s Anatomy, Bones, Kyle XY…), but I didn’t get hooked with Dexter. I mean, not on the first episode, or the second, maybe even the third. But after that, I wasn’t just hooked, I was OBSESSED! It really is one of the best shows I’ve ever watched. The fact that a show can actually make you side with a serial killer is pretty amazing. You know he is a killer, you know he enjoys killing (chopping!) his victims, you see how gruesome his ritual can be, and despite it all, you like him and root for him when you see he might get caught, even wishing the actual good guy, the cop that sees through Dexters bullshit, dissapears from the picture (which he does, by the way. THANK GOD!! And so Dexter gets away, with just a scratch on his leg!).

(As an aside, I gotta tell you: I don’t know how it is for guys, but the fact that Dexter is pretty easy on the eyes and has the best torso/arms/stomach ever kinda makes it easy for me to like him, serial killer and all. If he’d looked like Tony Soprano I would’ve probably stopped at that first episode and never ever seen the series again).

Given that I’m obsessed, I have been reading a lot about the show and watching Michael C Hall’s interviews on YouTube. One of the points everybody is making is that we relate to Dexter because like him, we all have secrets that we hide from other people. Dude! I don’t know about that! I mean, sure, we all have a dark side (although mine is mostly “grey”), but, being a serial killer? That’s streching it up a little bit, don’t you think? Whatever it is, I am sure you’ll be drawn to Dexter. It will make you re-think good and wrong, and how such a fucked-up man can actually do the right thing more often than not. I went from feeling horrified that he’s in a relationship with a really nice woman (who has little kids), to feeling horrified when he was NOT in a relationship with her anymore, to feeling horrified again that I wanted him (the serial killer, remember?) to get back together with her and her kids. Really, who wishes for a nice woman to date a serial killer? Apparently me!

So please, do yourself a favor and rent the first two seasons on DVD or buy them on iTunes or (godforbid!) eMule them. You’ll be happy you did.

One thought on “So he’s a serial killer, who cares?”