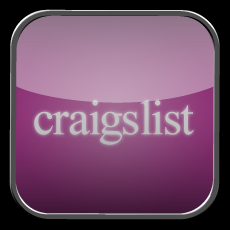 I was going to talk about how my pala partner and I played the last game of the season this morning and won, and how awesome it’s been playing in the women’s league again, after two seasons on the bench. But I think I’ll come back to this topic some other time, soon you’ll see, once all the scores are tallied and we have a winning team.

What I really wanted to talk about – I’ve wanted to do it for a while now – is actually Craigslist. For those of you not familiar with it, Craigslist is like eBay, but cheap. And I don’t mean cheap as in not expensive, I’m talking more along the tacky sense of the word. It’s free to post, and it is local. No annoying trips to the post office or shipping costs. No matter what city you live in, I bet you they got Craigslist. You can find ANYTHING on Craigslist, be it stuff or people. I love it. There are like a million sections on the page, where you can find used cars, clothes, baby rabbits, or that (NSA) date for Friday night when your girlfriend is out of town. Just remember what I told you about the local flavor of the site. In our case, this is Boise. Chances are you and your NSA date have like 15 Facebook friends in common. I’m just saying. And no, I don’t actually know that from experience.

I have used Craigslist before though, once to sell my white MacBook, and another time to (finally!) get rid of the children’s crib and high chair. But my favorite section is “Missed Connections“, followed closely by “The Best of Craigslist” (which you can visit if you want; the posts are hilarious, but mostly X-rated). The thing about “Missed Connections” is how easily they could be avoided if people just had some, how to say it nicely, initiative? In general, people are so afraid to make a move when they have the chance it’s ridiculous. I mean, I get it if you’re already attached to someone but for some reason want to hook up with the girl from the gym. But otherwise, c’mon, be bold! What’s the worst it could happen, that your crush says no? So, what? That’s pretty much what you’re going to have if you don’t say anything anyway. Besides, people in general don’t waste their time reading every-single-missed-connection-every-single-day like I do, so chances are they won’t ever see your post. So really, take charge, don’t wait, don’t be afraid to ask. Say something. You’ll be surprised at what could happen.

And yes, I actually know that from experience.