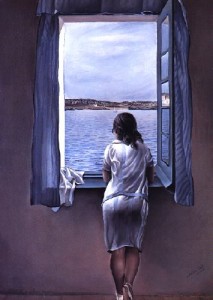 I remember how slow Sundays would go while I was growing up. I remember I’d have breakfast, maybe study a bit, get a drink with my friends, or go see Ortuella F.C. if I was lucky and they had a morning game. More often than not, I’d be back home by noon or one. And as my dad still says, “¡En Ortuella se come a las tres!” (we have lunch at 3 in Ortuella!). Two long hours looking out of my bedroom window, smoking a cigarette (or two, or three, or… you get the idea), making up stories in my head, wasting my time while I waited for the next bus to arrive so I could see who was coming or going.

It’s 11:15 pm and I’m still working, knowing that I have to be up before six to get my kids’ stuff ready for school, wake them up, give them breakfast, get them dressed, and spend about 45 minutes driving one to the Ikastola, the other one to school, all before getting to work by 8 am.

I bet you I racked up like 200 hours on that window. Or more. I want them back.

*UPDATE*: My sister brings up a good point. After I left for Boise, my family got a little Fox Terrier to replace me, whom they named, well, Boise!  He died last year, poor thing, so I won’t talk about how annoying he was because he would bark, and bark, and bark, and bark when it was time to go for a walk, which in his case, happened like 6 times a day, he was so spoiled… Pretty soon he’d taken possession of the window and made it way more difficult for us to continue gossiping about the people getting on and off the bus. (I guess, except for the barking, they got my replacement just right).