I hated the Choose your own adventure books when I was young. What do you mean there are 40 different possible combinations for the story? But which is the real one, then? I didn’t like being responsible for the protagonist’s fate, it made me uncomfortable. What if I chose the path that led him to his death? No way! I just wanted to be told the story and deal with it the way it was. It’s ok if he died, I just didn’t want to have anything to do with it. Now I wish you could order the Choose your own life adventure from barnesandnoble.com. Go back sixteen years and listen to Terese when she said she’d had enough partying for one night and to get the hell out of Portu. Say no to moving to Chicago. Go back one year and choose the Saturday shift instead of working on Sunday morning. And then choose the best story line.

As a whole, I am not a bad person, but there is certainly room for improvement. At some point or another I think all of us have come up with reasons to excuse an inexcusable behavior. Sometimes it’s little things, like when you got into your mom’s wallet as a kid or stole Lucky Strikes from your dad’s cigarette pack as a teenager. Other times it’s bad, like when you take something that’s not yours or go through someone’s mail without their permission. [Stealing or going through someone’s mail is a Federal offense, did you know that? I wonder what happens if you go through someone’s e-mail, though. Do they take your broadband away? Shit… I might as well be locked up.] Life is not always clear-cut and there are things you do which feel so right, but just because something feels right it doesn’t mean it is. Maybe it would have worked in one of those other storylines (so I was told), but not in this one, and that’s what makes it so hard. Nobody has problems quitting something they hate. 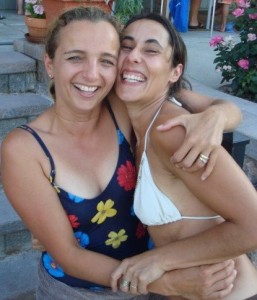 I wish I were a religious person so I could explain eveything as being “God’s will/doing/word”. Plus I would probably make better choices right off the bat, instead of waiting months or even years to do what I’m supposed to. But nope, I’ve never felt Him and I very much doubt it I will, by the look of things. However, either there is some type of balancing force in the universe or I am a lucky girl, because I swear I got rewarded after making things right.

Take last week, for example, when I finally woke up and accepted that “what ifs” are a waste of time and that hiding is for cowards. It sucked so badly. Like waking up at 5 A.M. after a long night of drinking to work on a translation. Like running out of gas in the middle of the connector – twice in six months. Like a cup of yesterday’s reheated coffee. But no sooner had I made the decision than I get an e-mail from my best German friend saying she’s coming to Boise at the end of the month. That’s the best news I’ve had in a long, long time!

(As far as my friend goes, I know she’d still be coming whether I woke up or kept dreaming, but it helps me to look at it my way. I need all the will power I can get.)