Last May my friend Jabier Santamaría encouraged me to write something for Buber’s Basque Page series “Nor Naiz, Gu Gara” (Who I Am, We Are), a section aimed to explore what it means to be Basque, from many different perspectives. I took a look at it and thought, maybe tomorrow, and like that for several months, until I finally decided to sit down and write my story. Diana Arbiser, who read the story and caught my spelling errors and Mark Bieter, whose comments and ideas were awesome, helped make the article much better than it originally was.

This is a copy of the story posted last night on Buber’s page. 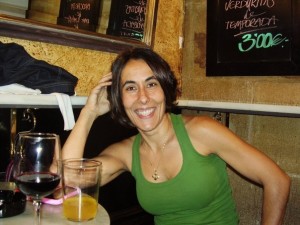 About three years ago I wrote an entry on Basque identity for my blog on the eitb.com website, “A Basque in Boise”, where I shared my feelings about being Basque, right after being accepted into Euzkaldunak, Inc. (Boise’s Basque Center). Some of my thoughts remain the same, although luckily, a lot has changed since then.

I was born and raised in the Basque Country, but my parents weren’t, and I’ve always struggled with that. I’ve always felt a bit ashamed. I did attend ikastola (Basque school) and studied Basque there, but that was the extent of my involvement with the language and the culture. I grew up during a time when ETA was very active and we’d have terrorist attacks virtually every week. I was – still am – disgusted by them and I removed myself from things like AEK (Basque acronym for “Coordination for Alphabetization and Teaching of the Basque language”), and Basque dancing because many people I knew that supported those ideas belonged to those groups. I realize know how stupid I was. I can’t believe I once associated ETA supporters with Basque culture just like the rest of the people in Spain.

I felt even more embarrassed after moving to Boise, home to a huge Basque community. At that time, I was barely able to carry on a conversation in Basque and many times over the years I had to explain to people why I didn’t speak Basque despite being from the Basque Country. Part of it, like I said before, was my fault for not making more of an effort to learn the language while I had the chance, but living in an area of the Basque Country where people predominantly speak Spanish didn’t help either. But it wasn’t just the lack of language that made me feel that way.  It was the lack of a Basque bloodline. I used to feel that people who were born here in the US, people who have never even been to the Basque Country, have the right to feel “more” Basque than I do because their great-grandfather happened to be from Gernika, Azkoitia, or Lekeitio.

I was 21 when I left Bilbao and I thought that being from the Basque Country would automatically open the doors to everything Basque. My first contact with the groups in Boise was Oinkari Basque dancers. I thought it’d be great to finally learn how to dance and make friends at the same time. I didn’t realize how tight those people were, though. Then, feeling like I wasn’t Basque enough didn’t help either. I couldn’t find my place, so about a month after I started the classes, I gave up.

Living abroad for the last 15 years has changed my views on the Basque Country and has helped me find my roots, especially since my kids started going to “Boiseko Ikastola,” the Basque language immersion preschool. I realized how important it was to make sure that they were integrated from an early age into the Basque community, that they develop a pride in being Basque, and that they forge long-lasting connections with other Boise Basques. Throughout the years I’ve come in contact with most of the Oinkari dancers, and I get them. Many are even my friends now. I want my kids to have the same in their lives, a group of people with similar interests and backgrounds, so we go to Basque dancing practice every Tuesday, Euzkaldunak’s monthly dinners, and Basque festivals. I play in the women’s pala league and I’m part of the new advanced Basque language class offered by the Basque museum.

Being accepted into Euzkaldunak, Inc. was a turning point on the road to finding my identity. It wasn’t just the fact that I was now officially part of Boise’s largest Basque organization, but how it happened. I had received an email from the secretary saying that she needed to verify my ethnicity before she could go forward with the application. When I asked what exactly she needed from me she told me not to worry, that the verification only applied to Basque-American members to-be. Knowing that I was born in the Basque Country was all she needed. It was that simple. All of a sudden, I realized I was the only one stopping myself from enjoying what I am. Reading my friend Jabier’s response to “Basque Identity” only reinforced that newfound clarity: I was not alone in my identity struggle. So I got over feeling embarrassed and took an active role in learning Basque and getting involved with the Basque community.

Some days I find myself still fighting with identity issues, but I don’t let that bother me as much as before. There are many ways of feeling Basque, and mine is just one more.