I was virtually inside my bed when I started thinking about today’s trip to Hailey and how much fun that was, and how I had left Duplicate Annihilator running on my Mac and maybe I should just go check how many duplicate pictures it found (1078) and as long as I was back at the kitchen table I should go ahead and write about our Trailing of the Sheep experience. It started real early for a Sunday (6 am) and ended quite late for a school night (10 pm). Are Sunday evenings even considered a school night? Or more like a night before a school day? Isn’t that what a school night is anyway? 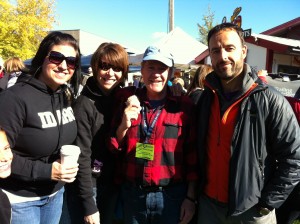 Ysabel, Miren, Iñigo, the kids and I set off towards Sun Valley just a tad before 8 this morning. The kids – I don’t care what they tell you – had a great time. Ok, maybe not the part where I made Andoni take his pants off after he got them all wet up to his knees at Red Fish Lake and then he got all pissy and told me maybe I should take my pants off and see how that felt. I was wearing a skirt, so I’m not sure what he was talking about. Iñigo spent the day taking pictures with that gigantic camera of his, Ysabel spent it mesmerized by my parenting skills, and Miren – poor girl – rode with me to and from Hailey and only complained once about my choice of music.

People in Ketchum (where the parade actually took place) are, how could I put it, rude. Or maybe we were just lucky to run into the only three bad-mannered people in the whole town. Who knows. It started at the Starbucks in Main Street, where a couple of guys (former sheepherders? Sorry, we got there late), were talking about the history of sheepherding in the Wood River Valley. I got my coffee, walked towards the little table with the sugar and the half-and-half, and was trying to explain to Andoni why we were there when I was rudely interrupted by this old lady’s really loud shhh-ing. I tried to ignore it and rose my voice ever so slightly for my son to hear me. The lady increased her shhh-ing accordingly, and I must say she is lucky I was having a good day (is it possible that I might be growing up?) because I didn’t even yell at her. I just told her to please let me be while I told my kid what the purpose of the presentation was. 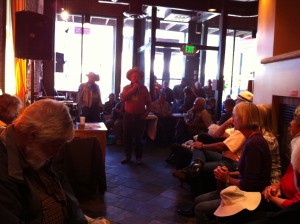 Not two minutes later Ysabel experienced the same annoying interruption – this time by a grumpy old guy – as she stood in line talking to people while she waited for her latte.

After these two unpleasant incidents we decided to ditch the Starbucks and walk around a bit while we waited for the parade to begin. No sooner had we stepped out of the coffee shop than a third grumpy old woman walks by and pretty much shoves my daughter to one side without so much as an “excuse me”. Apparently, there are many things to do and lots of places to go to (quickly) in Ketchum on a Sunday morning.

Lunch at Whiskey Jacques was yummy, although we suspect our server didn’t get home until late the night before. Let’s just say he could have been a bit sharper and maybe come around to check on us at least once more after bringing out the food. For a moment there I thought Ysabel was going to let him have it. We hung around town a bit afterwards and took some more pictures before heading back to Boise. Getting to Ketchum took us about two hours and change (we went the I-84 route); coming back took us a little longer. Part of it was taking the scenic route through Stanley (where we would have had a coffee at the Red Fish Lake Lodge had it been open and once we found it). The other part was following Ysabel, who, as unbelievable as it sounds, is even worse than me with directions.

All in all, it was a blast. I had a great time and I swear I don’t care one bit about the 687 bends to get home.

What? Oh, yeah, the Trailing of the Sheep! Here, I took a video of the entire thing:

2 thoughts on “Hailey’s (real quick) Trailing of the Sheep”