Six? More like two it seems, if you’re part of the Basque community. I’m not talking just about your local groups in Markina, Ortuella or Hernani, I’m talking globally, as in the Basque Diaspora.

It’s been one of those crappy weeks, but today is Friday, the sun is shining (I’m pretty sure) outside the walls surrounding the thousands of cubicles where we work at Hewlett-Packard (hopefully for a little while longer), my kids gave me hand-made flower arrangements last night as a late Mother’s Day present, and my daughter woke up 12 minutes earlier this morning to make me breakfast. Being sad on a Friday is not only an oxymoron, it’s plain wrong.

This weekend my hometown of Ortuella is celebrating a festival in honor of San Felix de Cantalicio, its patron saint. I feel a pang of envy when I think about all the partying I’ll be missing yet another year. No dancing for me to “Vivir así es morir de amor” at 4 in the morning inside Txutxi’s crowded bar. (You might laugh after watching the video, but you forget you’re watching it now, at a decent hour of the day during your coffee break, and minus those extraordinary alcohol-based mood changers as are kalimotxos and cubatas. Some people even go green and use grass.) 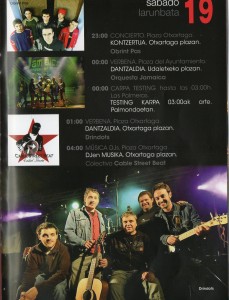 I forget how cool Basque Country festivals are. If you click on the program, you’ll notice the verbena (concert) starts at 01:00 in the morning. Even more special than the time is the band playing tomorrow, Drindots. I know, I know, you thought I’d never get to the six/two degrees of separation point I mentioned before, but I’m almost there. I digress a lot, another one of my many faults. Check out the guy in the middle of the group, that’s Jon Urdangarin, Drindots’ lead singer, Lazkao’s Basque language school director, and my Basque teacher while I was enrolled in HABE.

During that time, back in 2009, I would work (almost) every day on my homework assignments, and about 3 or 4 times per week we’d meet on Skype and he would answer my questions and explain the concepts I couldn’t grasp just by reading the lessons online. Jon mentioned at one point he played in a band, but I’d never heard of it and then we went back to talking about Basque grammar. That year, I went home for the summer. I was crazy about Gatibu (still am), so I tried to hit as many of their concerts as I could. One of them happened to be in Morga, a small town in the middle of Bizkaia, almost impossible to reach by public transportation. Luckily, my friend Leire loves me and trusted me with her cute little Fiat. Gatibu played, I enjoyed the concert like the fan I am, then it was time to roam the bars. After a while, my friends and I went back to the plaza to dance a little longer. “What the…?” I thought as soon as I noticed the lead singer of the band playing up on the stage. There he was, my teacher, Jon Urdangarin, rocking it up.

The following month I went to Las Flores, Argentina to study Basque for a week (I’ll explain that one another time), where I met Leonat Egiazabal (Montevideo) and Rocío Basterra (Bahía Blanca). Both of them studied with Jon in Lazkao, as did my friend Josu Zubizarreta (Boise), who then struck a friendship in San Sebastian with Carolina Perez Mou (Mendoza), sister to one of my fellow students in Las Flores. This summer, I will meet up with up with Leonat in San Sebastian to participate in the Excellence in Basque Studies workshop. Another friend, Esther, met Rocío during an international pala tournament in 2008. After the Basque language course, I spent some time in Buenos Aires, where half of Leire’s family lives. (What an awesome city, by the way. I want to move there and listen to its people talk – which they do – until the day I die). Some of Leire’s grandma’s siblings were forced to leave the Basque Country during the war and made Argentina their home. It was a little bit weird meeting one of her uncles for coffee, who looks just like one of her uncles from Ortuella, but talks with that Argentinian accent. Now, my friend will meet Jon during Saturday’s dance, and so will my family.

I’m mesmerized by the way we connect to one another. I love finding links between one set of friends and another. Even better, I love making new friends through existing connections. I know it’s just the way it happens when you move in the same circles for long periods of time, and the more people you know the more people you will meet. Still, it makes me happy when I think about it. And happy is the way I want to start my weekend.

2 thoughts on “Six degrees of separation”