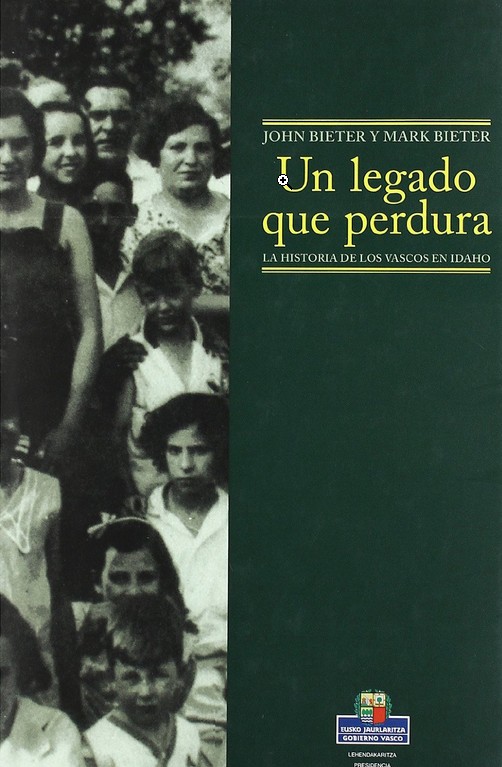 Although it has been around for about a decade, I only discovered Mark and John Bieter‘s “An Enduring Legacy: The Story of Basques in Idaho” a couple of years back.

In their book, the Bieter brothers chronicle three generations of Basque presence in our state from 1890 to the present, an engaging story that begins with a few solitary sheepherders and follows their evolution into the prominent ethnic community of today. I found it easy to read and very informative, plus I finally had the answer for when people ask why so many Basques ended up settling in Idaho.

This weekend, while wasting some quality time aimlessly wandering on the Internet, I somehow came upon the Spanish version of the book in PDF format. What a great find, I thought. However, before sharing “Un legado que perdura: La historia de los vascos en Idaho” on the blog, I checked with Professor John Bieter, one of the authors and Basque language classmate on Monday evenings at the Basque Museum, to make sure I didn’t break any laws. He gave me the go ahead along with a few words for all of you:

It was a real honor and we were thankful when we found out that the Basque Government was going to translate our book “An Enduring Legacy: A History of the Basques in Idaho” into Spanish. Although immigration is often viewed linearly —as movement from one nation to another— it’s better described as an ongoing conversation and exchange between two countries. Having the book in Spanish enabled us more access to the other half of this conversation. Here’s to having it in Basque next time!

We hope you enjoy the book.

You can access or download the Spanish version of the book in PDF format here, or you can buy it online from Elkar.

For an English preview of the book, you can check out Google Books, or you can buy a copy from Amazon.com.

The first Basques to arrive in Idaho were largely young, single, poor, and illiterate, and most were closely identified with sheepherding. Their cultural, religious, and linguistic differences isolated them from their non-Basque neighbors, and they tended to form connections almost exclusively with other Basques. By the second generation, Idaho’s Basques had assimilated in their public lives while preserving their Basque traditions through dances, picnic festivals, and sporting events. Third-generation Basques, mostly fully assimilated, have paralleled the national trend of cultivating the ethnicity of their grandparents, finding in it both a sense of community and a unique personal identity.

As this well-documented history demonstrates, Idaho’s Basques have become one of the West’s most successful ethnic minorities. But they are also among the most active groups in preserving and cultivating the traditions and culture of their immigrant grandparents by which Idaho’s Basques are maintaining their ties with both the traditions of the past and the modern European Basque homeland. They have created a subculture that is neither purely Basque nor purely American. Their experience offers rich insight into the complex process by which immigrants become American while retaining their distinctive cultural identity and roots.

Professor John Bieter graduated from the University of St. Thomas with a degree in Social Science and a concentration in Economics. He completed his Masters degree at Boise State University and earned his doctoral degree from Boston College where he focused his research and teaching interests on Immigration and Ethnicity, the American West, and American Catholicism. Currently, John serves as an advisor for pre-service educators in the College of Social Sciences and Public Affairs and as Director of the Center for Basque Studies. He is also an associate professor in the history department at Boise State University.