According to an article published in a Basque newspaper on Thursday, linguist Jaime Martín thinks so. After twelve years of research, he has concluded that Basque comes from Dogon, a language spoken in Mali. He has found words in Basque made up of two terms in Dogon, such as ‘senide’ (brother), which is ‘sani de” in the African language. However, his findings have already found opposition. During an interview with Faktoria’s radio program in Euskadi Irratia, Euskaltzaindia’s Secretary Xabier Kintana criticized Martín “lack of methodology” and said “he couldn’t make head or tails” of the findings .

A linguistic study carried out by professor Jaime Martín states that Basque comes from Dogon, a language spoken in Mali. He compared 2,274 words between both languages and found similarities in 70% of them. 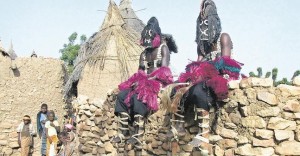 Martín, a Romanic Philology major and Language and Literature tenured professor for forty years at the Cervantes Institute in Madrid, devoted twelve years to comparing Basque and Dogon, linguistic structure as well as vocabulary.

His findings, summarized in the study “An enigma untangled: the origin of Basque”, is that the Basque language originated from Dogon – nowadays spoken by some 300,000 people in the sub-Saharan country located between Algeria and Mauritania.

According to him, his “affection and sympathy for Basque people dates back a long time”. “As a philologist, I was curious about Basque”, he said.

A few years ago, he read a thesis about Dogon by French author Geneviève Calame-Griaule, daughter  of Marcel Griaule, the most renowned expert on this nation. It was then that he noticed “from the very first words” that there were “similitudes between both languages in form and meaning.”

He decided to research applying scientific criteria, because the resemblance “couldn’t be coincidence”. For that, he compared the linguistic structure and vocabulary.

On linguistic structures, Dogon and Basque concur in sentence placement order, with the subject at the beginning, the verb at the end – which is the biggest difference from Romance languages – and the direct object in the middle. Also, demonstratives (this, that) go after the verb, as opposed to Latin and Spanish, where it goes before. “I was surprised”, he confesses. They differ in that Basque maintains declinations while Dogon does not have them.

As far as vocabulary goes, he compared 2,274 from both languages and found 1,633 similar pair, which represents 70% of the total.

According to the author, comparative linguistics from a %50 of similarity one can talk about a relationship between two languages.

He also found Basque words made up of two Dogon terms, such as “senide” (brother), which is “sani de” in Dogon. Furthermore, he noticed that most of the words were older in Dogon that in Basque. All that has taken him to the conclusion that the Basque language originates from Dogon.

According to his theory, desertification of ub-Saharan Africa forced the people that lived there to emigrate to the Iberian Peninsula and the mediterranean basin, and thus the expansion of the terms.

Therefore, according to this professor, the Basque language, which has been the subject of multiple theories about his origin, none of them conclusive, would have an African origin.

He is not the first comparing Basque with other languages; as Martin points out, Koldo Mitxelena – the most famous Basque linguist – denied the correlation between Basque with African languages.

Another well-known linguist, Antonio Tovar, carried out a comparative study among Basque, Berber, Copto and Egyptian and three other caucasian languages.

Tovar only found up to 7% of similitude with Berber, very little, but pointed out how similar Basque sentence structure was to other languages.

Jaime Martín contacted the Basque language awareness service at the University of the Basque Country and Auñamendi publishing house to present his work, but was unsuccessful. “It hurts me to say they didn’t get back to me”.

Now, he plans to get in touch with Euskaltzaindia or interested philologists because Martín claims he tried to carry out a rigorous linguistic investigation, with no preconceptions, and that he “has no problem” corroborating it.

As always, I apologize for any errors in translation that I might have made.

20 thoughts on “Has the origin of Basque language finally been discovered?”