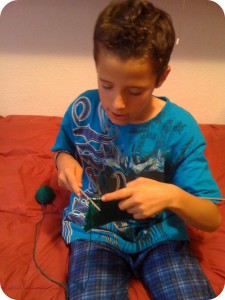 I woke up this morning to a picture of my friend’s kid on Olentzero‘s lap (he’s the Basque Santa). Not only is it the middle of June, but it was also 7 in the morning after a late night out with my pals. I found out later that her son had taken her phone when she wasn’t looking to send me the photo. He is 7. A few minutes later, my daughter called from Spain on her iPad, I responded on my mobile, both cameras on. She looks all cute and sparky, I look like crap and half asleep. She is also 7.

I love technology, don’t get me wrong. Six weeks apart from the kids are way more bearable when you can see them every day. It also makes it possible to keep friendships strong across the country and across the ocean. However, I sometimes worry about the time we spend looking at a screen instead of playing outside or taking up hobbies that don’t require a plug. So when my mother told me that my son wanted to learn how to knit, I was shocked at first, completely overjoyed later. I used to love it when I was a kid and made a bunch of sweaters for my dolls and for myself. These days, I’m lucky if I feel like watching a movie at the end of the day instead of collapsing straight onto bed.

My son, who wants to be a professional soccer player when he grows up, is half-way done with and totally proud of his first scarf . Just like she did with me, my mom is passing on to Andoni what she does best. He made me promise this morning that we will knit together after we return to Boise from our vacation in Bilbao.

Maybe there is a balance between technology and old-fashioned pastimes after all, and it wasn’t even sparked by the older generation. I think I will make myself a winter blanket. In blue.

5 thoughts on “Old-fashioned pastimes for the new generation”