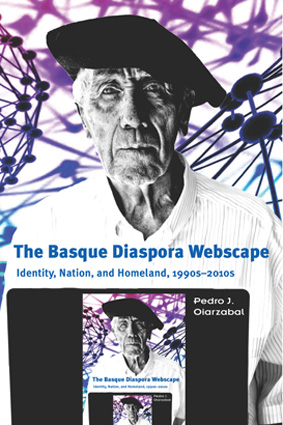 The Basque Diaspora Webscape: Identity, Nation, and Homeland, 1990s-2010s is the latest book written by Pedro J. Oiarzabal. It is published by the Center for Basque Studies, University of Nevada, Reno, under its Basque Diaspora and Migration Studies book series. Based on his PhD dissertation, Oiarzabal has written an innovative book on the Basque institutional diaspora presence on the Internet that has taken him seven years to finalize. “Undoubtedly, the process has enriched the outcome of the book,” Oiarzabal states.

The Basque Diaspora Webscape constitutes, according to the author, the first book of its kind, opening up a new subfield in Basque Studies. The book presents a clear “still” photograph of a particular time in the history of the web’s development and its usage by the Basque diaspora and how complex social practices offline move online. It explores its evolving presence on the web, taking into account the web’s ephemerality. “Information and communication technologies,” Oiarzabal argues, “collapse space and time, but they also reinforce personal ties, weaving a dense and complex identity and ideological network.” “If in the 1990s,” the author points out, “only a few Basque diaspora associations from four countries established themselves in cyberspace, by the 2010s over 65% of the total existing associations (over 210), from twenty countries, have set up their own online homes. Even more, as of June 2013, over 140 Basque diaspora organizations from twenty countries have established formal presences on Facebook, the largest network on the web.”

The Basque Diaspora Webscape examines the many different ways these websites represent the organizations of which they are a part, and the ways they depict Basque culture, homeland, nationhood, identity, and political aspirations. Indeed, the analysis of the nexus between the political dimension of the Basque diaspora and technology is one of the main contributions to the book. “I cannot emphasize enough the fact that the first Basque diaspora groups to establish a presence in cyberspace were political groups in nature.”

The Basque Diaspora Webscape is the result of the study of a specific diaspora such as of the Basque and its interaction with emergent technologies; “however, it can be of great help to other researchers of diasporic and minority cultures on the Internet as well as anyone within and outside the Basque diaspora interested in their own culture in the 21st century,” Oiarzabal concludes. In William Douglass’ own words, “The Basque Diaspora Webscape constitutes a historical baseline against which future research can be made.”

To order a copy, or for more information, please contact the Center for Basque Studies, University of Nevada, Reno