One of the things I love the most about running the blog for almost six years now (I just checked, it’s hard to believe), is that people are starting to notice and will call my attention to different news or events so I can help spread the word. I’m not sure how effectively I achieve this goal, but I like to lend a hand.

Today, I’d like to talk about a very exciting new product, developed by a group of Basques with the help and input of other Basques around the world. It’s called ZerB, the Basque beer. 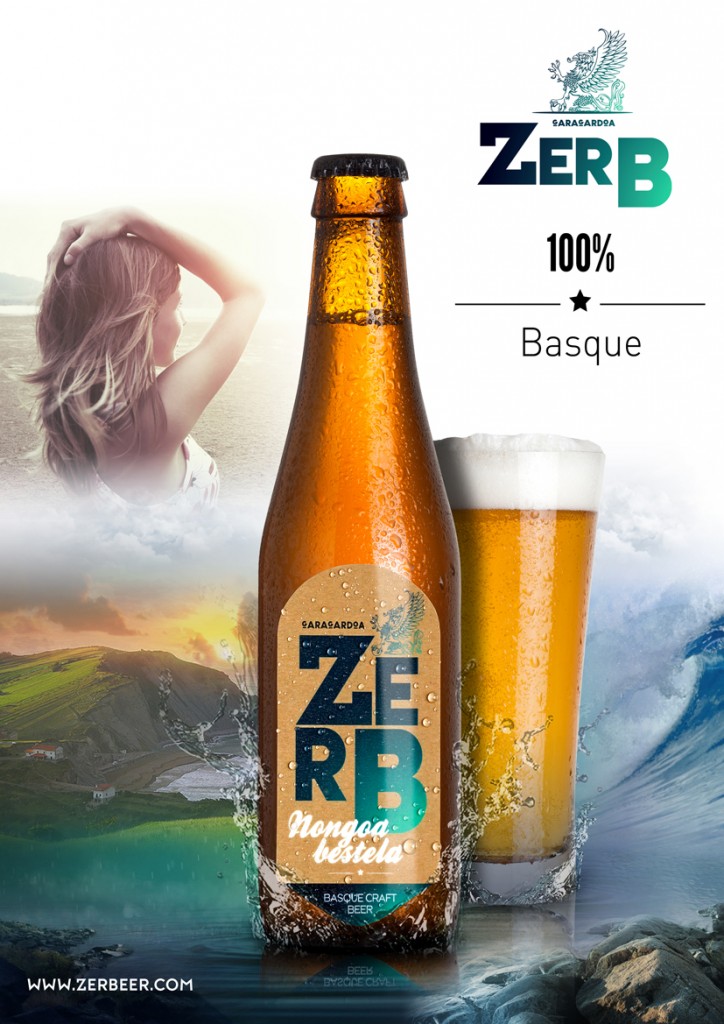 A group of four friends living abroad, united by a sense of longing after spending some time away from their home, decided to join forces and embark on a great adventure fueled by their love for beer. They always knew they wanted to make beer, but they wanted it to be for everybody. For that reason, they gathered input and knowledge from those that knew them best: the bartenders. And they didn’t just settle with those closest to them, but they also checked with the many Basque Centers scattered around the globe, from Sydney to El Salvador.

Following their guidelines, the friends started developing the beer, comparing results with beer masters and microbreweries from the Basque Country, Germany, and the United States. That’s how they managed the taste, color and flavor unique to this excellent beer, always open to improvement.

ZerB is a pale ale, resulting from an agreement among the 200 bartenders involved in its design. Most of them wanted a beer made of barley, but some were pushing for a beer made of wheat, so in the end, they decided to go for a mix, to make everybody happy. Because so many people participated in the making of ZerB, the creators have made the recipe public and encourage you to send ideas and suggestions to make it better. Also, they are happy to help people or breweries interested in making the beer with any questions they may have.

The following is a video (in Basque) from an interview at EITB a few days ago.

ZerB is produced using top quality malts, barley and wheat, in order to create the wort that will turn into drinkable beer. Once these malts are used, their role within the production process is over and the residuals are not needed any longer.

Nonetheless, these residuals still contain high nutritional value and, therefore, instead of throwing it away, they are handed over to Iker and Maider, local farmers from Legutio (small village in the Basque Country), in order to feed their cattle.

This way, not only can do they recycle the waste they created, but they provide the community with top raw materials. These cattle will eventually produce products that locals will enjoy the same way they enjoy ZerB.

ZerB lives thank to ingredients that come from the Earth. This is why they did not doubt to offer their humble support, when some good friends of ours started up a rice company* in Sierra Leona, with the honorable mission of producing and distributing rice among local communities at low cost.

Rice is the main nutritional sustain to too many families in lots of countries, and it is therefore, a highly politicized commodity. Theycannot but admire and wish the best luck to the two Argentinian entrepreneurs in their endeavor.

Whenever you have time, take a look at their project at westafricanrice.com. (WARC was awarded the best agricultural company of Sierra Leona by the President of the country in 2012)