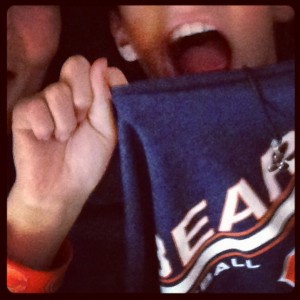 I knew the biggest meltdown of the year was inevitable as the Packers scored a touchdown with only seconds to go on the 4th quarter against the Bears on Sunday. He’d had a pretty significant one after losing at pala during the final a few days ago, and BSU’s loss to Oregon State didn’t help either, but nothing compares to the pain and the disappointment in Andoni’s face when the cheese heads won the game that took Chicago out of the race. No playoffs for the Bears this season. No Super Bowl.

Andoni, no doubt about it, is a total Idaho boy. Winter jackets make it from the closet to the car and back to the closet without ever touching his body. The mere sight of a button-up shirt gives him the shivers, and he’s learning to snowboard. Once he takes on wearing a baseball cap, he’ll be complete. He’s an unconditional BSU fan, but he was born in Chicago and so the Bears became his favorite NFL team. Both teams even sport the same colors, isn’t that great?

How people become die-heart followers of one team or another generally has to do with where they were born or what college they attended, but that’s not always the case. My parents were born in Valladolid, but after 50 years they’re pretty much Athletic’s biggest fans. A friend from Bilbao fell in love with a southern team from Segunda B during a trip to Cadiz, and I myself will root for FC Barcelona unless they’re playing against Athletic. There are even those who, after being born in Bizkaia, they still decide, for some twisted and incomprehensible reason, to cheer for Real Sociedad. I mean, it’s ok to like them if you’re giputxi, but other than that, how could you, cousin Txus?

Regardless of who you follow, supporting a team brings a sense of belonging and comradeship, an excuse to get together and party. Friendly banter with fans from the other team. Road trips. Every game is a brand new start. Every season is filled with possibilities and anticipation. This could be the year when Athletic brings home the Doblete and takes out the Gabarra. The Bears will have another chance to win the Super Bowl. BSU could finish undefeated. There will be winners and losers. Injuries. Laughter and tears. Joy and disappointments. We will celebrate victories and mourn the losses. But we will have fun in the process and enjoy every moment because that’s the whole point. Just like a brand new year.

Don’t be afraid to dream, live and work towards your goals in 2014. Sure it won’t always be great, but let those challenges you overcome, those mistakes you will undoubtedly make be a positive lesson in your life, learn from them, and move on. It’s a new year ahead, make it yours.