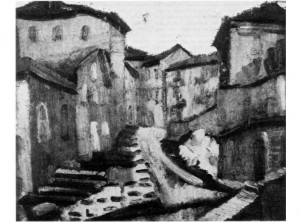 I remember the first time I heard Bruce Springsteen’s The River and what impact it had on me. It was time again for my uncle to get a haircut, so as always, my aunt ringed my mom and scheduled a time to get together at their home in Gallarta, which is only a 10-minute bus ride from Ortuella. I decided to go along because as closed as we lived, I didn’t spend that much time hanging out with my younger cousin, and I really enjoyed her.

We were around thirteen or fourteen, and she LOVED Bruce. I knew who he was, of course, but I hadn’t’ taken the time to delve into his music. Luckily, my cousin was so excited to share, I soon became an expert too. We listened to a few songs before she played The River. For years to come, I would cry every time I heard the song because it is such a sad story. I found out later in life that, more often than not, couples are unable to keep the river from drying after a number of years. I don’t cry anymore when I hear it though; it lost its punch after the thousandth time.

I think I was about to hit puberty when I learned that my aunt, my uncle, all my cousins in Gallarta were not related to me by blood. All those years thinking that my mom and my uncle were brother and sister when they weren’t. They even looked so alike with that long nose they both sported! My mom looks more like him than she does her real brother. Not to mention I think I’ve seen my “real” uncle about ten times in my life. The shocked lasted about a minute and then they went back to being my family just like they always were.

The River came up on my iPhone as I was driving home from work the other day and I started thinking about my kids and how they now have another set of family members thanks to their step-mom. I must confess that, initially, it was not easy for me to get used the idea and I felt my insides rebel a bit when the kids talked about their new cousins. “What a hypocrite I have been,” I thought as I hummed the words along, like I always do. It is the same thing for them now as it was for me then. It is that simple. I was really excited because I realized that little by little all the pieces in my life are not only falling in place, but they’re falling in place correctly, without rubbing each other anymore.

The great thing about loving people is that, no matter how many individuals come into your life, one never runs out of love. You don’t need to stop loving an old family member or a long-time friend to take a new one in. How cool is that?

6 thoughts on “The River”