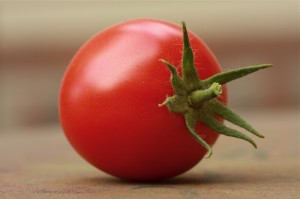 I try my best to have dinner as a family with the kids every night, given that breakfast and lunch are are out of the question during the week. Most days dinner involves my daughter eating like she’s trying to win the gold medal at the 100-meter dash, while simultaneously fighting with her brother about, jeez, pick anything. Chances are they’ve argued about it. Once in a while we manage to act like normal people and carry out meaningful conversations or simply fill each other on the events of the day.

Occasionally, though, when I think I’ve finally caught up with them and have a pretty good grasp of the things they know, these kids manage to shock me again. During these times, I usually end up with nothing to say because

Last night’s meal seemed to be going pretty well until Maitane picked up a cherry tomato from her salad bowl and announced to the rest of the table that, in her opinion, this tomato looked like a penis. “It’s kind of small,” I thought, but hey, it happens. Then, she proceeded to bite into it.

My ears immediately perked up, sensing the danger.

“Well, it’s ok I guess,” he continued. “You are too young for that”

What the hell? Did my 10-year old just say that? I obviously chose Option a) and kept working on my chicken.

Maitane, without missing a beat, looked at both of us and responded, “Right, like I would ever eat a penis.”