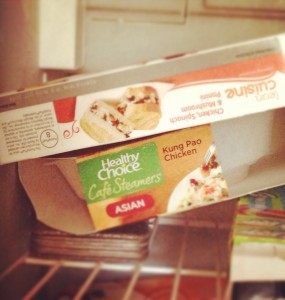 You know when you lose your wallet and people say did you look in the freezer? Do.

I left the supermarket late in the evening on Memorial Day with a bunch of groceries to replenish a nearly empty fridge after my trip to Portland. That was the last time I saw my wallet in any of the usual places normal people keep their wallets: purse, computer bag, kitchen table, entryway console table, the inside of your car door, gym bag, kitchen counter, bedside table, bathroom vanity, hamper… You get my drift.

I realized early on Tuesday morning that not only did my wallet not make it to work with me, but I that didn’t have the faintest idea of its whereabouts. I knew it couldn’t be too far away, though: either I left it at Fred Meyer or it was at home hiding somewhere. It wasn’t at the Lost and Found in the store, so I skipped the gym and went home instead during my lunch hour to look for the damned thing. It took me less than ten minutes to accept I was doomed and that I would need to get a duplicate of my driver’s licence.

I wasn’t to bent out of shape about wasting an hour at the DMV, they have semi-comfy chairs and I love people watching. Besides, it was time to update my address and get a newer photo on there anyway. I didn’t change my weight because some day I’ll be size 4 again. (What? I was 115 lbs once for three months. Who says I can’t do it again? Oh, ye of little faith…). On the other hand, calling Bank of America for the fifth time in eight months to get a replacement card was kind of embarrassing. I used to have a few bills going through my credit card automatically every month, but I had to cancel the auto-pay feature to avoid getting calls from people when their payments failed because I forgot to update their account information with the new number, again.

Last night, after a really fun day at the pool with friends, the kids and I came home to have dinner and relax. A glass of New Age with ice and lime sounded like the thing to wash down the salad while enjoying the evening sun on the patio. I took out a wine glass from the kitchen cupboard, the chilled wine from the fridge, along with a medium-sized lime. Then, onto to the freezer to grab a few ice-cubes to round up the drink. I yelled so hard the kids jumped out their seats. Right there, tucked behind the ice-cube mold and underneath a couple of frozen meals, my long-lost wallet with its now useless cards and outdated ID. And they say wine makes you forget!

It wouldn’t be too horrible if this was the first time I do something so stupid, but I already blogged about it the first time it happened. I guess it’s true what people say about man being the only animal that trips twice over the same stone.