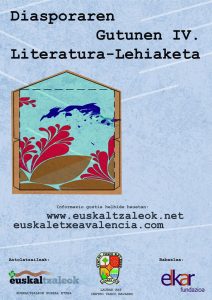 The dissemination and promotion of the Basque language has always been one of the main objectives of Laurak Bat, Valencia’s Basque Center. Basque language courses, movies, lectures, debates and meetings, among others, are some of the activities carried out so far for this purpose. The first Literature Letter Contest Contest took place three years ago. The outcome was so good that the Basque Center decided to make the contest an annual event.

The contest is open to everybody, especially to those learning Basque in our center and other centers around the world.

To read the Contest rules in Basque, Spanish, and Valencian, click here.