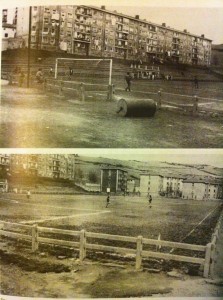 Old soccer field by our house

Weekends come and go and I forget to check La Liga schedule to see which teams are playing on a given weekend so I can tune into Justin.tv and watch the games with my son, who is a sports freak. I’m lucky that way; my daughter is the princess-est of them all, and my son is all boy. The time difference kind of messes it up though, as games usually take place during my mornings, and there is always something going on that prevents me from watching.

Aita used to take me to the Ortuella soccer games every Sunday from the time I was 4 years old. We’d walk down to the old soccer field near our house, or get my tío Guillermo to give us a ride in his old Renault 4 cargo van with the stick gear coming on the dashboard. My tío would take my cousin Jesús, who’s a year younger than me and ended up a Real Sociedad fan (I don’t get it), and he and I would bicker non-stop, just like siblings do. I remember this one time (or maybe it’s so engraved in my brain after 33 years of listening to my family tell the story every summer that I think I remember), when tío Guillermo stopped to fill up the tank and we all got out of the car and into the convenience store. We’d been driving home for a while when aita and my tío realized how quiet it was in the back seat, and had to return to the gas station to pick up my cousin, who’d been forgotten inside the store.

I never stopped going to the Ortuella soccer games. Aita was the vicepresident of the board for quite a while, and when I was older I decided to join. The board met every Monday at 8 pm, in a small office by the train tracks, and it was fun and weird at the same time to be there with a bunch of 40 to 60 year-old men, talking about the previous day’s game, who played well, who sucked, how many raffle tickets got sold, and whose turn it was to stand around at the soccer field’s entrance the following weekend to sell some more. I remember the discussions in true Basque style, surrounded by a cloud of smoke so thick you could pretty much grasp it with your hand and save it for when you run out of Lucky Strikes. Whoever shouted the loudest usually won the argument. I don’t know what the members thought about having an 18 year-old girl in the board, but when I left my sister took my place, so they still got stuck with two Chicos anyway.