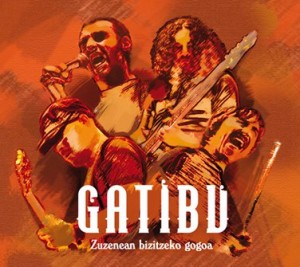 As I try to concentrate on the translation project I have to send back tomorrow while I listen to the Athletic game online, I can’t keep my mind from wandering towards the trickling of bad news I’ve been getting during the past few weeks from people close to me. Two of them told me what’s up, but they would kill me if I said anything in public. The third one promised he’d tell me on Friday, but I’m still waiting, and I’m still worried. So, given that a) I can’t talk about it because I’d die or, b) I can’t talk about it because I don’t know what’s going on (and I’d die too, anyway), I thought I’d share with you a couple of cool friendship stories.

Some people have rules about how they make friends. My take on it is this: take them when you can, from wherever they are. It’s hard to make good friends, why set limits? I have met several good friends on Facebook before I ever met them in person. Some have been my friends since I was two years old; others I just met. And others I met long ago (although they say they don’t remember me, boo!), but just now realized how much they like me, so we’re good. Some I talk to every day, some not that often. Some are girls, some are boys, some young, some older, married, single, divorced, black, white, “green”, atheists, or religious. They come from all backgrounds and all parts of the world. It’s pretty cool. They all have something special to give.

I had to go to the post office the other day to pick up a package from a friend. I met Rober two summers ago when I was “de gaupasa” (partying all night) in Munguia. We met at a bar (duh!) and talked for about 15 minutes. He told me how much he liked handwritten letters and that I’d have one waiting for me in Boise when I got back if I gave him my address. He wasn’t kidding either. We’ve been corresponding since then. (Luckily he finally broke down and gave me his email address, phew!). So it took me a bit by surprise when I saw the note from the post office letting me know I had a package from Rober waiting for me. I was listening to Gatibu on my iPhone and watching that couple drive away while I opened the envelope, and you can’t imagine how taken aback I was when I saw his present. He’d sent me “Zuzenean Bizitzeko Gogoa”, the live Gatibu album, and you already know how I feel about Gatibu. It was the best present he could have sent me.

As I was driving home listening to my new CD I thought about last year, when I was at Mely’s house having coffee while our kids played. I was out of minutes that month, so when that +34 94 number showed up on my screen I hesitated for a couple of seconds before I took the call. I didn’t recognize the number, and I thought it could be an emergency. I answered and this guy goes “Henar?” I didn’t recognize the voice either. He goes, “It’s Zigor”. “Zigor Alkorta?” I asked, and sure enough, it was him. I met Zigor my first minute of my first class at Asti-Leku, and for the following four years we pretty much sat side by say in every class. He’s the reason why I saw “Sid and Nancy“, a movie which, surprisingly, I liked a lot. Zigor loved punk music and wore his Doc Martins religiously. He told me to come out to the balcony, and I’m all confused trying to figure out why he was in Ortuella, calling me on my US number after we hadn’t talked or seen each other for like eight years. Imagine my shock when he tells me he’s not in Ortuella, he’s standing outside my apartment in Boise with his girlfriend. I couldn’t believe it. I apologized to my friend Mely and charged back home. I don’t think I’d ever packed my kids in the car so fast before! We all went into my apartment when I arrived and had a coffee and talked a bunch. They told me they were on vacation, riding a motorcycle all over the US, and had decided to change their route at the last minute to come to Boise and say hi. To be honest, I’m still in shock a year later.

I can’t wait for my turn to shock somebody. 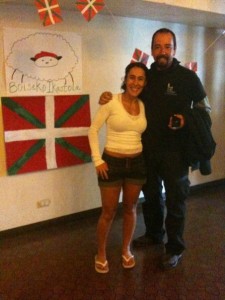 Zigor and I at Ikastola

The three of us

One thought on “Surprises”