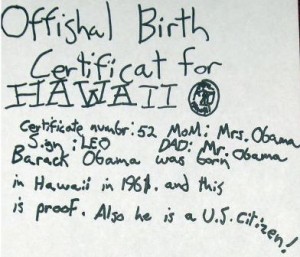 I don't see what the problem is

I was driving to work this morning, listening to the news after dropping the kids off at school, and I couldn’t contain my enthusiasm when I heard that the White House released President Obama’s long form birth certificate, after many had been questioning its validity for a long time. Thank God for Donald Trump, who finally put his foot down and convinced the president to disclose the document. Apparently, one of the president’s counsels had to fly all the way to Hawaii (poor thing), to personally go into the Hawaii State Department of Health, who made an exception to release a copy of President Obama’s long form birth certificate. I’m sure that was really hard, you know, to get the Department of Health to make that exception for the President of the United States. I hope that this lawyer got to fly in first class, and not only that, I also hope he didn’t have to rush back and was able to spend a couple of days hanging out at the beach. This is a very important matter, and no limit should be placed into the amount of money necessary to put it to rest. What other unemployment issues, for example, could be more important?, I thought this morning while I put $70 worth of gas on my Saab.

Then again, as I’m writing this post and researching the web to make sure I quote accurate information, I come across this one article, and I am disheartened once again. Apparently, the birth certificate is still raising questions. Oh no! I wish I were wrong, but as you can see for yourself I am not lying. Maybe this birth-questioning Trumps are onto something after all.