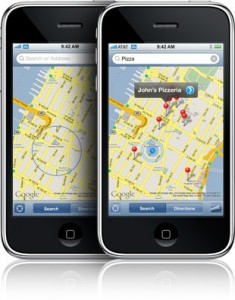 Now that I have a new job, and a longer commute to get there, I went back to my old ways of tuning into 670 KBOI in the mornings and saving the playlists in my iPhone for the gym and the trip home from work. Which brings me to the point I want to touch on today.

So, like I said, I’m listening to the news and they’re talking about how some people complain that GPS technology on smart phones violates our privacy. I mean, sure, your whereabouts can potentially be tracked down just by carrying an iPhone in your pocket. But really, who are you, Tony Soprano? There are those who are all for it, though, like the man who got his stolen truck back by playing that country song backwards. I’m joking. This guy had left his iPhone on the front seat and was able to recover the vehicle by tracking it’s location though a website monitoring the phone’s GPS application.

I know! I couldn’t believe my ears either! What do you mean the guy left his iPhone inside the truck while he went back to his house? What if someone called? Or texted? How long was he planning on leaving the iPhone unattended? It’s just wrong. I know what you’re going to say, that he’d have never found the truck otherwise. Well, he didn’t know it was going to get stolen, did he? He wouldn’t have left the car running in the first place. It would have been way easier to turn the engine off and take the keys (and his iPhone!!) back to the house until he was ready to leave.

I got to work bewildered. I took my iPhone to the break room and had a five minute breathing session while I updated my FB status, texted Diana back, and responded to my friend’s email message.