I remember writing normal letters (you know, longhand, pen, paper?) fifteen years ago, when I first came to Boise. Back then we still used dial-up and international phone calls were expensive and you had to be home to use the landline. There was no iPhone, no Skype, no Facebook. With everything, letters would only take 4 to 6 days to arrive, and I could talk to my friends and family every weekend. Besides, I knew how to speak English.

I got broadband at home, a phone that has me connected to the world in real-time – mails get instantly delivered to my inbox, I use Skype to make video-calls on the go, Facebook to take pictures which I immediately upload and share with my friends and family, wherever they may be. I have a great support system made up of friends that care for me, the best Basque community which helps keeping the ties to the Basque Country strong and allows my kids to continue on with our traditions, culture, and language. And even then, not matter how many emails I write, photos I tag, Basque festivals I enjoy, and pala leagues I play, there is a void that can never be filled. The constant missing of the people I left behind. The feeling of not belonging one hundred percent in a foreign country, wishing I could meet my parents for coffee on Sunday mornings, then go to San Mames with my sister in the evening. The void doesn’t always stay the same; sometimes it is smaller and bearable, other times it’s so huge I wonder if I’ll ever be content. 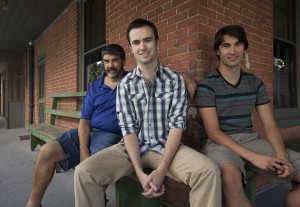 Now take that feeling and multiply it by one thousand.

Imagine Joaquin Zubizarreta. Imagine all the Basque men that like him, left the Basque Country to work in a foreign land. No money, no language skills, no friends. Only their txapelas and the will to save money so they could go back to their friends and family as soon as possible. Some did return, but like Joaquin, many stayed and lived a solitary life up in the mountains of the West. Day after day of nothing but the sheep, the sounds of nature and the thoughts in their brains. No way to share their pain, frustrations, and sadness. How did they make it? I think about them and I feel like crying, just like many people did last night while watching the movie. I guess there was no other way than toughing it out and keep going, and that’s how they made it. I have nothing but respect and admiration for Basque sheepherders and their families.

Last night’s premiere of “Zuretzako” was wonderful, touching, and very personal for many of those in attendance. The Egyptian Theatre was packed, and everywhere you could see the familiar faces of people from the Basque Community, many of which came up at different points in the movie. People were already trickling in by 6:15, and those of us who got there early got to enjoy parts of Javi’s previous documentary, “Artzainak”, being played on the big screen. At seven, Patty Miller, Basque Museum director, went up on stage and introduced Javi and his movie. Afterwards, Javi made a short speech and shared with the audience the first movie he made, about Iñaki and a monster, a 11 minute long movie he shot with no budget and only a roll of black and white film.

The cast in “Zuretzako” is not made up of professional actors and actresses; they are people like you and me who did an extraordinary job playing the part of sheepherders, wives, brothers, and friends. I was specially impressed with Josu, who plays young Joaquin at the beginning of the movie, then Joaquin’s son Aitor in the second half. “Zuretzako” is filmed in Basque, and Josu did an amazing job considering Basque is not his first language.  Luis Zubizarreta, who plays old Joaquin, was also great. He is one of the nicest, happiest, friendliest guys you’ll ever meet, and it was strange seeing him as Joaquin, a quiet man hardened by the solitary life of sheepherding. If you know Luis, you know what I’m talking about.

After the movie, Javi returned to the stage and thanked everyone involved in the making of the movie, from the cast to the real-life sheepherders that helped during the filming. At one point Gloria Totoricaguena, Executive Director at Cenarrusa Foundation for Basque Culture, asked that all those who worked as sheepherders in the past got up so the audience could see them. There were so many… Right there in the Egyptian theater, older guys now, successful, happily surrounded by their wives, and kids, and grandkids, watching the story of their lives. It was my favorite part of the evening.

After the movie, everyone moved over to the Basque Center for a drink and a bit of socializing. Before I left I talked to Javi for a few minutes about his plans for the future. He’s applying for a grant to spend a year abroad, which he would use to move to San Sebastian to continue with his film-making research.

No matter what, though, Javi is going places.

To order copies of the movie you can get in touch with Javi at javi.zubizarreta@gmail.com, or visit the film’s website.