I came up to Seattle for the weekend to hang out with the local Basques during their Spring Dinner celebration. I met a bunch of very nice people, got a  membership to the Seattle Basque Club courtesy of the club’s (former) president, and spent the best part of the day playing in the Mus tournament. I don’t remember the last time I eat and drank so much. We didn’t win the championship, but considering I hadn’t played since 1989 and my partner lost all concentration right at the very end, we didn’t do too bad. Besides, the Cigandas won, and those guys are great. They drove three hours from Moses Lake to Seattle to play in the tournament, then drove back for another three hours after dinner because, as Pedro Ciganda told me, “There is no better place to sleep than home.” 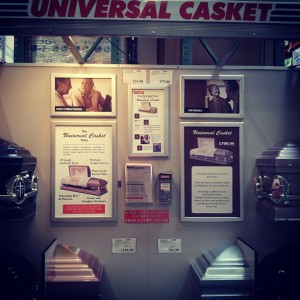 Before the Mus games started, I helped my friend with a Costco run to get some last-minute stuff for the dinner. Costco is a membership warehouse club where everything you buy is about twice the size of what you’ll find in a normal grocery store, and leaving the place with a bill under $100 is unheard of. I used to be a member, but I just don’t need a box of tampons that will last me until I hit menopause.

We go in, and right by the Customer Service desk, I stop dead in my tracks. Well, figuratively, although I’d have been in the right place had I done it literally. As it turns out, along with that 23 lbs bucket of Vegetarian Emergency Food Supply (what?), you can also take care of the accommodations for your final destination. You can see how nice the colors are and, judging by the pictures, the caskets seem pretty comfy as well. They even come with an adjustable bed and mattress. I don’t know, it might just be me and my skepticism, but both of those selling points seem pretty irrelevant to me, as 1) those things will be underground soon after they put you inside, and 2) will you seriously care about the adjustability and softness of the mattress at that point?

In any case, I kind of liked the pinkish one, but being single and all, I should have asked whether they come in a two-pack or can be purchased separately.

6 thoughts on “Costco, with you until the very end”