Juan Jose Ibarretxe, former President of the Basque Autonomous Community, stopped briefly in Boise on his way to New York from San Francisco. The purpose of the President’s trip was to talk about the opening of the Lehendakari Agirre Center. 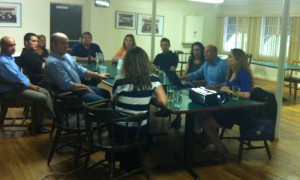 Ibarretxe presenting to the Euzkaldunak Board, Basque Center, Boise. June 22, 2012.

As opposed to San Francisco and New York (where the presentations were open to the public), in Boise the Lehendakari only met privately with several local organizations.

Before his presentation, I had a chance to meet with the Lehendakari for a brief interview. Afterwards, I talked with Joe Lasuen, a board member of Euzkaldunak, to get his opinion on Ibarretxe’s visit and presentation.

Q. You came to the US to present the opening of the Lehendakari Agirre Center. Can you tell me more about your visit?

Lehendakari Ibarretxe. This is an ongoing project, a research program that I direct at Columbia University in New York and George Mason University in Washington D.C about the Basque Case, a comprehensive model for sustainable human development. After 2 years, these universities want to continue with the program. We are thinking about the creation of a new center, the Lehendakari Agirre Center. He was a professor at Columbia University from 1942 to 1946. He is a symbol not only for the Basque Country, but for the United States too. We want to use, so to speak, the figure of Lehendakari Agirre to improve the creation of this center, which uses the Basque Case to offer to other parts of the world the Basque Case as an experience for sustainable human development.

Q. What exactly does it mean “sustainable human development”?

Sustainable human development, what’s that? It’s a bit complicated because five or six years ago it was very difficult to speak about these types of questions, to debate this concept in the States. It’s a new concept. At the end, it is about improving a triple agenda: an economic, social and environmental agenda. Perhaps the conclusion of this research program is that the polynomial for the future is R + D + I + K, which stands for Research, Development, Innovation, and culture. However, in Basque we say “kultura” with a “K”. In each country people must add their own “K”. Sometimes we think about recipes, but it is impossible to apply your country to another without any type of adaptation. The key is the “K”, the “K” is the key, the culture.

Q. When did the idea for the project start?

The project is an ongoing project. I have been working at Columbia University and George Mason University for the last two courses. I direct the research program in these universities. And now, we are interested in improving the creation of this new Center. With these presentations I want to introduce the idea of this ongoing project to the Basque people. But not only to the Basque people – we are in close contact with Columbia University and George Mason University – but also with Stanford, Harvard, and other universities.

Q. I think the issue of making Basque people and their culture known outside of the Basque Country is very important. After 16 years in Boise, it seems almost impossible to believe I was once completely unaware of the Basque Diaspora. None of the history books we used at school ever mentioned it. Do you see a class on Basque Diaspora being incorporated into the curriculum for Basque schools?

I think that with the new technologies we have more and more information about the efforts you are making here to improve the Basque culture. And sometimes you are a reference, an example for us. It’s incredible visiting Argentina, for example, the US, and see the work you do.

Q. You were president of the Basque Country for 10 years, how did your life change after stepping out of the spotlight? Was it difficult?

No, not at all. I feel at home at the university. It was a great honor to be president, but I am very happy. I don’t miss the pressure or the spotlight.

Are there talks already to open new campuses in other cities, other than New York and Washington D.C.? Specifically, are there plans to open a campus in Boise?

We think that the headquarters in the United States must be at Columbia University because the Center will have the Lehendakari Agirre as a symbol. For us it’s very important the presence of our former Lehendakari at the university. However, there could be other sites as well.

Q. Lehendakari Ibarretxe came to Boise this weekend to give a presentation on the Lehendakari Aguirre Center project. I know he gave a similar presentation in San Francisco, open to the public, but not in Boise. Any specific reason?

Joe Lasuen. The Lehendakari’s schedule was made originally for stops in San Francisco, New York and Boston. Boise was added later on. Unfortunately, there was little time to organize a meeting and announce it to the larger community.

Q. What are your thoughts about the Lehendakari Aguirre Center project? Were you familiar with the concept of “The Basque Case”?

My initial thought about the project is that, with Dr. Ibarretxe’s involvement, it has great potential to do a lot of good for people all around the world. The presentation that he made was very impressive. I really think that leaders and scholars will benefit from his vision and leadership.

The Basque Case is a special one. Most of us know that the Basque economy is strong, the strongest in Spain. What we may not know is that it is now one of the strongest in Europe, thanks to Lehendakari Ibarretxe and his government. It is no wonder that academics at institutions like George Mason, Columbia and Harvard are showing interest in this case.

I asked the Lehendakari’s assistant what projects or tools she envisioned the Center providing. She thought that workshops or conferences exposing policy makers and leaders to the Basque Case would be a great first step.

Q. Do you think Boise (or Idaho) will be part of the project in the future? In your opinion, what type of work or events do you envision in the future, as part of this project?

The Center is brand new. They have a lot of work to do before they get off the ground. I do think that a great many groups will be interested in the work the Center will do.

As for Boise, or Idaho, I would hope that leaders at any level would be at least interested in listening to how a group of people took their underperforming economy and transformed it into one of the most robust in Europe in such a small period of time. Human sustainable development is an interesting concept. The Basques have a lot to teach the world in this regard.

Q. Anything else that you’d like to point out?

The Board of Directors really enjoyed the time that we spent with Lehendakari Ibarretxe. He assured us that he loves coming to Idaho, and that he would definitely be back.

2 thoughts on “Lehendakari Ibarretxe in Boise: An interview with the former president of the Basque Country”