If you follow A Basque in Boise blog or are somewhat involved with the Basque community in the United States, you already know about Izaskun Kortazar, a young girl from Sondika who dedicates a great deal of her time working as NABO’s Basque language coordinator. She was one of the teachers at Boiseko Ikastola when I first met her, and she taught Basque to my kids when they were younger. Now, almost five years later, she teaches Basque to me and a bunch of other people every Monday at the Basque Museum. 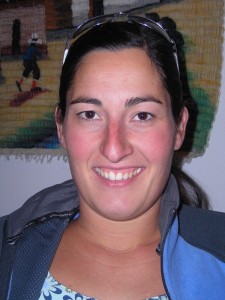 Izaskun lives and breathes in Basque, and she works tirelessly to make learning the language easy, accessible, and affordable. Your email, text message or voice mail will never go unanswered and I have yet to see her without a smile on her face. She’s the reason we have Basque language classes for adults in Boise and in many other states, she made Barnetegis a reality in North America, and also spearheaded the creation of the naboeuskaraz.com website. Additionally, Izaskun was the driving force in creating the Kuxkuxeo taldea and the Boise Korrika back in 2011.

She has appeared in several radio programs and this summer she was featured in El Correo newspaper. That article is in Spanish, however, the folks at Euskalkultura.com took the time to translate it and post it on their website. I hope you enjoy reading about this exceptional girl and support her in her efforts if you ever have the chance.

Other related articles about Izaskun: