Olentzero’s grandkid (he’s become a usual on A Basque in Boise blog), is back from several months of spreading joy, presents and letters to people outside of the Basque Country. We met him last year, after his trip to Africa, where he delivered messages to the locals from family members now living in Euskadi, and last Christmas he did the same in Mexico and other parts of South America, with his coal-mining outfit and an oar that helped him cross the the Strait of Gibraltar.

In his blog, Roge tells us of Olentzero’s adventures in great detail (and in Spanish). 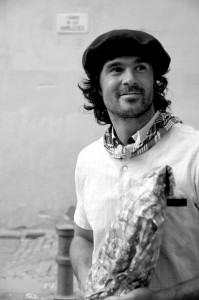 On December 12, Olentzero left the Basque Country by plane towards Cancun. He took with him five messages to deliver in Mexico and two in Guatemala. He carried a suitcase full of presents, photos, video-messages and letters that immigrants living in Euskadi gave him for their families in their country of origin. He also took a zesta-punta.

He traveled through the Yucatan by bus and hitch-hiking. His first stop, a Mayan village in Merida. It took him forever to find it and he had to sleep in the church’s portico. The next morning, a handful of young kids woke him up and took him to the family he was looking for. He was welcomed like a son and stayed there for a few days. They taught him words in Mayan and he taught them some in Basque.

The, he visited an older couple to give them letters and photos. Even tough they spoke nothing but Mayan, he was able to communicate with them with signs, looks and gestures.

On Christmas Eve, Olentzero’s quintessential night, he went to Campeche. He carried a present from a Basque grandmother to his grandson who lived in that part of Mexico, but she wasn’t home. Dissapointed, Iru started playing soccer with some kids. He gave them a piñata filled with candy and thought he would surprise them acting as Olentzero during such an especial night.

He climbed the roof in order to throw presents through the chimney or window, but a neighbor saw him and call the police, who arrived immediately. One of the policemen aimed the gun at him and the other one grabbed him forcibly and pushed him inside the police car. He was taken to the station like a common criminal and from there he was put in jail, where he spend the night with another prisoner.

Iru, dressed as Olentzero and with his zesta-punta, tried to explain he was the Basque Santa Claus but the police thought it was an implausible story and didn’t believe him. After telling his story to other people in the station who understood his situation, he was finally let go.

You can hear these and other stories (in Spanish), on Radio Euskadi and Radio Vitoria’s “La Casa de la Palabra” radio program, where he appeared as guest on March 6, 2013.